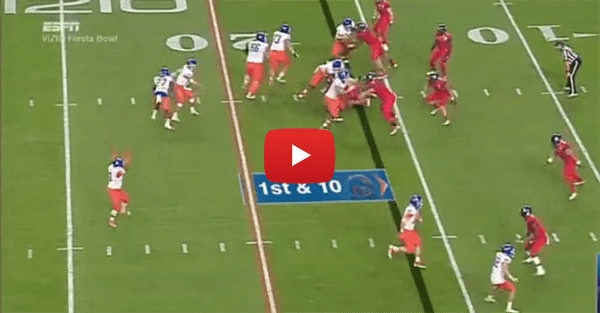 Boise State is currently beating Arizona 21-7 in the first quarter of the Fiesta Bowl in a shootout that’s lived up to the pre-game hype.

The Broncos’ became famous in the 2007 Fiesta Bowl after a hook and lateral play and a Statue of Liberty two-point conversion beat Oklahoma. On the same field seven years later, Boise State showed that the Statue of Liberty play is still in the playbook and is still effective.

Boise State running back Jay Ajayi took the behind the back hand-off for the 16 yard touchdown — including a nice stiff-arm at the end on his way in the endzone. The touchdown was Ajayi’s 27th on the ground this season and his second of the Fiesta Bowl so far.