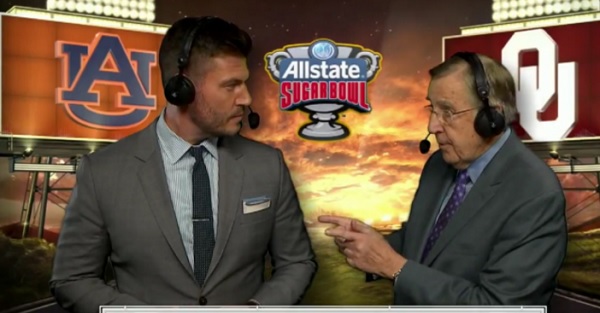 Unfortunately for ESPN, the lead story out of the Sugar Bowl has almost nothing to do with Oklahoma’s big win over Auburn in Monday night’s Sugar Bowl.

Brent Musburger is one of the longest-tenured broadcasters in college football, but Musberger came under fire on Monday after his comments on Oklahoma running back Joe Mixon. After two years of being held up in court, the video of Mixon violently striking a woman was released a few weeks ago, and the video was certainly shocking to many.

During the Sugar Bowl, some took offense to Musburger praising Mixon’s second chance to succeed in college football.

I rewound this to make sure I wasn't being too tough on Brent. Nope. It's even worse the second time. This is embarrassing. pic.twitter.com/QAoikxck9G

ESPN could have used the Joe Mixon story to address a huge problem in sports. Instead Brent Musburger wished him a lengthy NFL career. Yeesh

Musburger eventually doubled-down in the issue, and he emotionally defended his earlier comments on Mixon.

With how much controversy Mixon has already caused, it now looks like Musburger has wrapped himself up in it by making a statement of his own.