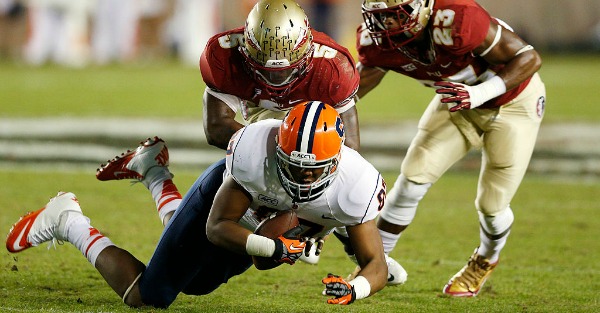 Another Syracuse football player has decided to transfer out of the school, marking an alarming thinning out of a program that’s lost nearly a dozen members in the past two months.

Senior tight end Kendall Moore took to Twitter Monday and announced his intentions to play his fifth and final year of eligibility elsewhere.

It was the best of times playing for @CuseFootball ,but i have officially made the decision to transfer for my fifth year of eligibility.

The 6’5″, 245-pound Chicago native was granted a fifth year of eligibility after missing the majority of the 2015 season with injuries. He leaves the Orange with just 14 catches for 150 yards and two touchdowns in four seasons.

Moore’s departure, which leaves a void at the position with no returning tight ends for 2017, is reportedly due to a significant decrease in tight end usage under first-year head coach Dino Babers. Moore had one reception this season, while tight ends as a whole caught a total of six passes.