Colorado takes hilarious shot at Jim Harbaugh with this tactic 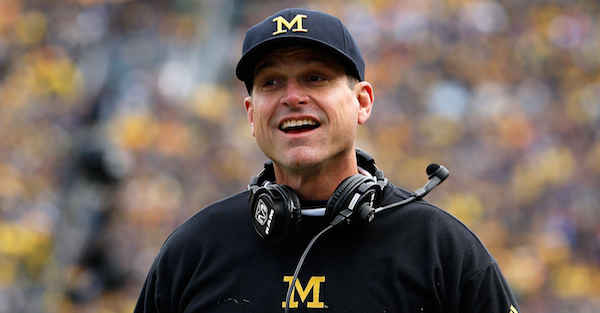 Jim Harbaugh is hilariously secretive. In fact, Michigan released this “depth chart” in advance of the 2016 season opener and, for the most part, the head coach has been reluctant to release any sort of information as to who will suit up for the Wolverines on a weekly basis.

Harbaugh and his team will host the Colorado Buffaloes in Ann Arbor this week and, just days before the game, the visiting squad released an interesting depth chart of their own.

Michigan doesn't do a depth chart, so Colorado made a fake one for the week. Nice work by SID Dave Plati! pic.twitter.com/EQr0LloHrB

In short, this is fantastic work from Colorado and, according to the tweet above, it comes from SID Dave Plati.

This depth chart includes movie characters like Happy Gilmore and Roy McAvoy, Family Guy stars in Stewie and Peter Griffin, former NBA center Manute Bol as a wide receiver, 5-foot-3 actor Danny DeVito as the backup quarterback and much, much more. It would be hard to think of a better way to poke fun at Harbaugh’s fairly ridiculous pre-game tactics, and Colorado appears to be very loose prior to entering the Big House.

The Buffaloes will probably lose on the field given that they are three-touchdown underdogs against a top-five team, but Colorado certainly won the battle off the field prior to kick-off with this troll job.