Just when all hope was lost for Texas A&M's football season, the team found themselves with a new face on the field.

This football season has had a lot of ups and downs for A&M. From the overthrowing of redshirt sophomore quarterback Haynes King by junior quarterback Max Johnson, to injuries during the Arkansas game that left the team's defense with a majority of freshmen on the defensive line, to both King and Johnson getting injured, A&M has had a rough time of it. 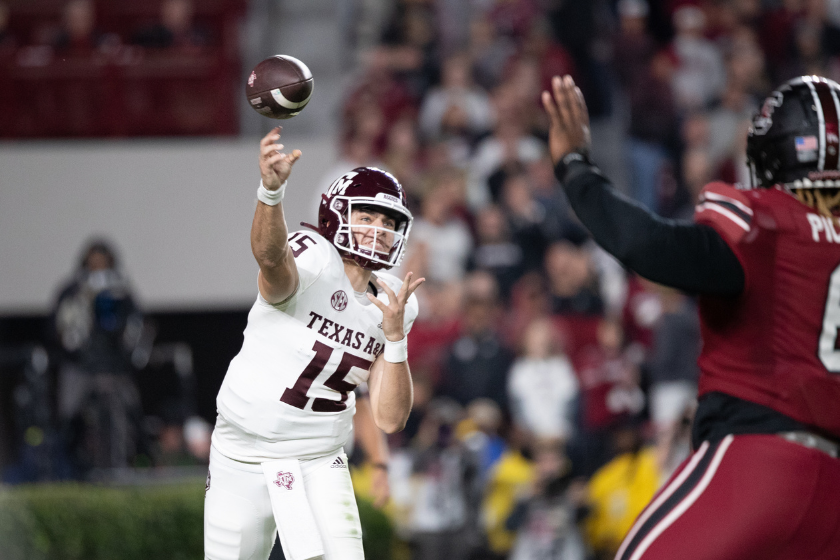 Conner Weigman was recruited out of Bridgeland High School in Cypress, Texas by a long list of schools that included A&M, Arkansas, Baylor, Florida, Oklahoma, and Texas. The homegrown Texas A&M product was the long anticipated quarterback for the Aggies since the preseason, even though head coach Jimbo Fisher selected King to lead the team. Weigman was a five-star rated prospect coming into A&M as the 22nd ranking player for 2022 recruiting class and the No. 2 quarterback, according to the 247 Sports Composite.

Weigman wasn't predicted to see playing time this year as he was originally third string quarterback for the Aggies, but as fate would have it, both Johnson and King suffered injuries this season, allowing this true freshman to step up to the plate. The quarterback saw his first playing time of the season during the tail end of the South Carolina game the week prior to getting the starting job from Coach Fisher against Ole Miss.

During the game against South Carolina, Weigman struggled to recover the win against the Gamecocks after they inherited a 9-point lead on the Aggies. He entered the fourth quarter following King's shoulder injury. He completed eight out of the 15 passes, but ultimately fell short, resulting in a 30-24 loss for A&M.

What was even more surprising to Aggie fans was not only seeing Weigman on the field in South Carolina, but also seeing him start in the Ole Miss game.

"I liked what I saw [during South Carolina] and Haynes was banged up," said Fisher, according to On3. "We knew it. He could have been available but it would not have been right to play him again this week. I felt very comfortable playing Conner out there, as I've said before. And he's done it in practice. He's really getting the reps and jumped in there."

The Aggies were off to a rough start after the Rebels scored within the first three minutes of the game. However, Weigman didn't disappoint as he quickly balanced the score at seven apiece. He and freshman wide receiver Evan Stewart were a power duo for the duration of the game. When Stewart was one-on-one you could trust that Weigman would take advantage of it.

"I thought Connor -- you know, man, first start out there and to do what he did -- I thought he was outstanding in the game," said Fisher, per On3. "Showed a lot of poise, a lot of composure about what he did, how he did it. Made throws, gave us a chance to win the game at the end. I mean, you can't -- the guy's got heart, toughness, charisma. He's got it all, and like I said, I thought some of our receivers really made some nice plays in the game. And what we did give up, we know we got to protect him."

The quarterback continued to throw precise and bold plays with a quick thinking ability that surpassed his predecessors. The team didn't claim the win, but one thing's for sure -- Weigman is the future for A&M football.