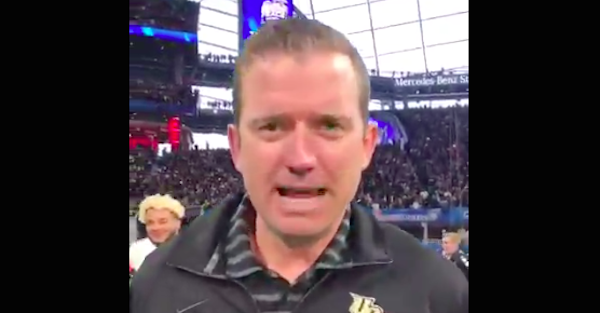 UCF may have been excluded from the College Football Playoff, but don’t tell that to athletic director Danny White.

Following his team’s convincing, 34-27, win over Auburn in the Peach Bowl, White proclaimed the Knights as “national champs” and followed that up with “undefeated” in a video posted to UCF Athletics’ official Twitter account.

The Knights experienced a huge turnaround under departing second-year head coach Scott Frost, who coached in the team’s bowl game despite accepting the same position at Nebraska last month.

After inheriting a winless team in 2016, Frost led UCF to a bowl berth in his first season, as well as finishing as the only undefeated college football team in 2017.

Instead, UCF entered Monday’s game as the No. 12 team in the nation and an underdog against heavily favored Auburn.

But the heroics of quarterback McKenzie Milton and the high-powered Knights offense helped the team exceed expectations once again to end a magical season on a high note.