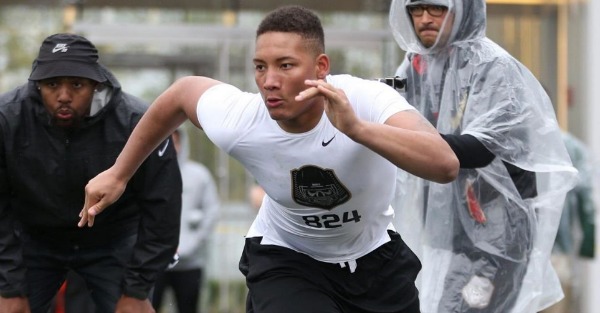 Dorian Hardy, a 4-star defensive end, announced on Sunday he plans to attend Penn State of the Big 10 conference.

Hardy, from Paramus (NJ) Catholic, stayed fairly close to home by choosing the Nittany Lions, since State College, PA is just three and a half hours to the west of Paramus. He also told Bleacher Report:

“I want to go to a school where they can compete for a national championship or a big bowl game every year. I want that program to be a top team every year. Other than that, just a place where I will feel comfortable and where the coaches value me. I just want to go to a place that feels like home.”

Hardy, a 6-foot-5, 241 pound class of 2018 recruit, is the No. 6-ranked weakside defensive end in the country and the No. 6-ranked player in the state of New Jersey. He was offered scholarships from the biggest names in college football, including Miami, Ohio State, Florida, Texas and Notre Dame.