School under fire after two glaring typos in scholarship offers 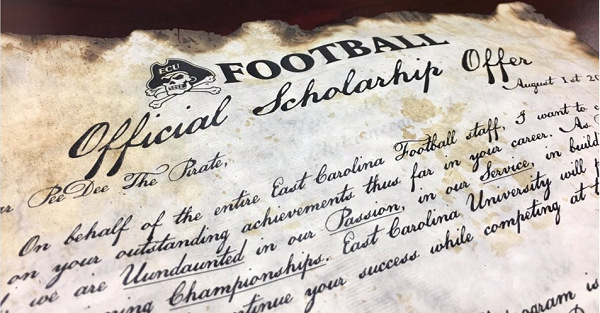 East Carolina’s mascot is a pirate so the opportunities for themed items to give out to recruits is almost limitless. That includes scholarship offers which they made to look like actual pirate scrolls.

It’s a fantastic marketing scheme and would have gotten them some sweet publicity if they hadn’t committed the ultimate internet sin by having two typos in there. People on Twitter found them pretty quickly and let the team know their mistake in some not-so-subtle ways.

So not only did the Pirates misspell “scholarship” but also misspelled “undaunted”. This could have all been avoided by just employing a spell checker or proofreader. The team has said they are sending out a revised version of the offer, but the damage has been done for the most part now.