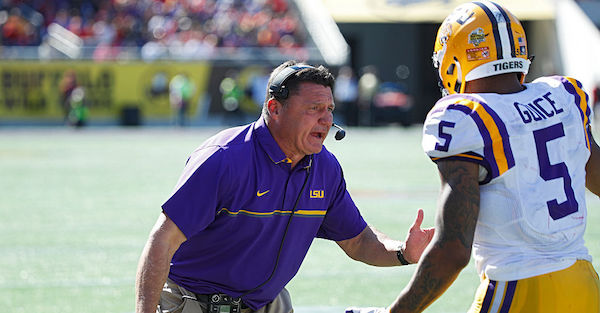 After the dust from National Signing Day has officially settled, many national media outlets have started to take a look at how some of the notable college football programs fared on Wednesday.

Of course, Georgia came away with the No. 1 recruiting class in the country after a huge day flipping several top recruits. Other schools like Florida State, USC and Texas A&M came away as winners as well, according to an article by ESPN.

While those programs did well, ESPN listed a couple of big-time schools that didn’t quite live up to expectations: LSU and Miami.

“It was a day of tough losses for the Tigers. Five-star Patrick Surtain Jr. was considered a longtime lean to LSU but signed with rival Alabama. Then coach Ed Orgeron lost ESPN 300 QB James Foster to fellow SEC West foe Texas A&M. On top of that, the Tigers missed on receiver Mario Goodrich, who signed with Clemson. LSU didn’t walk away empty-handed, signing four-star wide receiver JaMarr Chase, but the week began with higher hopes.

Miami, on the other hand, still finished with a top-10 recruiting class, but they also missed out on several other top-rated prospects which could have improved their class even more.

It’s very difficult to place Miami into this category considering the Hurricanes finished with a top-10 class. Oh, but what could have been. Miami started the day watching Surtain, Campbell and Andrew Chatfield, all from a school 40 minutes from Coral Gables, go elsewhere. On top of that, Florida State won out for Peach State four-star defensive lineman Jamarcus Chatman and Texas kept ESPN 300 DT Keondre Coburn. The Canes weren’t shut out completely, signing ESPN 300 receiver Marquez Ezzard. But like the Hurricanes’ season, it started big and fizzled out at the end.

Of course, it hasn’t even been 24 hours since National Signing Day ended so it’s far too early to really get a grasp on how LSU and Miami will be in the future. We can only speculate at this point, but it’s certainly not the time to panic for Tigers and Hurricanes fans.