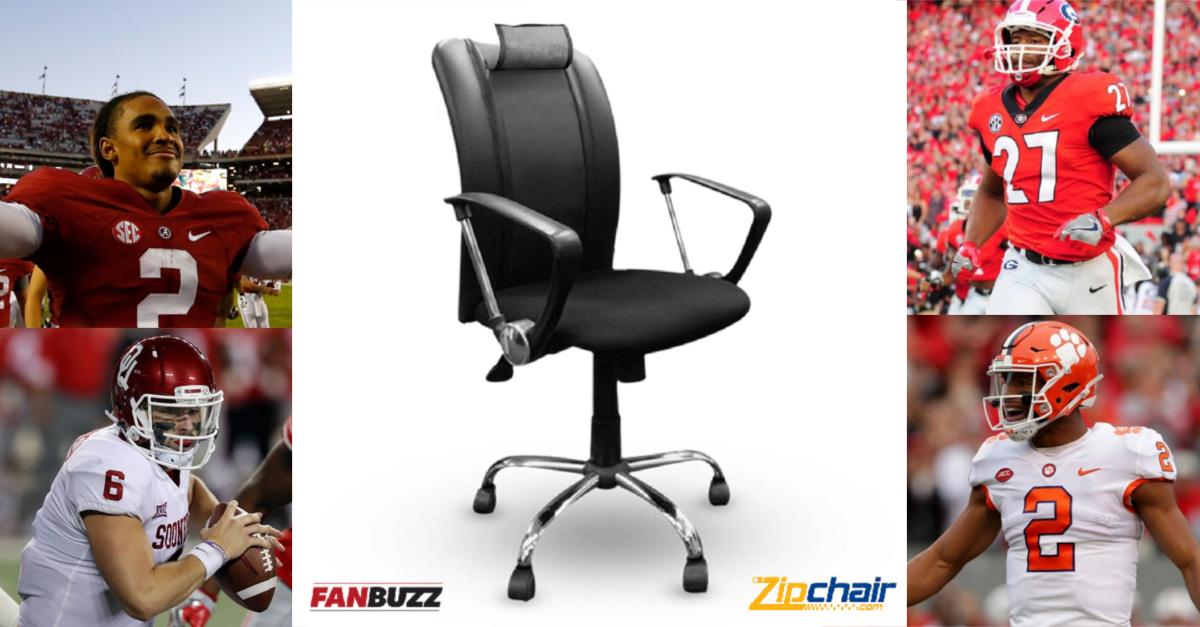 FanBuzz, in partnership with Zipchair, is giving away one free curve task office chair (msrp $249.99) to one lucky fan.

For contest rules and information, please go here: FanBuzz/Zipchair giveaway rules
*Note: The winner does not have to select a custom chair from one of the four College Football Playoff teams*

The Clemson Tigers the College Football Playoff after winning the national title last season, but this is a much different Tigers team from last season. Star quarterback Deshaun Watson has since departed to the NFL, but he has been replaced by steady junior quarterback Kelly Bryant. Bryant and freshman running back Travis Etienne have helped lead the Clemson offense while the defense has once again performed as one of the top units in the nation, allowing under 13 points per game so far this season.

Nick Saban’s Alabama Crimson Tide sneaked into the Playoff for the fourth consecutive season, as the Playoff selection committee chose the 11-1 Tide over the 11-2 Ohio State Buckeyes for the final spot.

Much like Clemson, Alabama has relied on a steady offensive performance while absolutely dominating on the defensive side of the ball. Alabama has only allowed an average of 11.5 points per game this year, which ranks No. 1 in the country ahead of Clemson. The defensive performance has been particularly impressive, as the Tide have battled several injuries on that side of the ball all season. Star defenders Hootie Jones and Shaun Dion Hamilton will miss the Sugar Bowl game against Clemson.

Oklahoma is making their second appearance in the College Football Playoff, having previously made it in the 2015-16 season. A lot of the pieces have changed since then — including first-year head coach Lincoln Riley — but the one constant comes in the form of Heisman-winning quarterback Baker Mayfield. After losing Dede Westbrook, Semaje Perine, and Joe Mixon all to the NFL, Mayfield potentially outperformed expectations with one of the best passing performances by any college quarterback in recent memory.

The Georgia Bulldogs are perhaps the surprise team that made this year’s College Football Playoff. The SEC Champions entered the year ranked No. 15 in the AP Poll, but the Dawgs soared up the rankings after stringing together several dominant showings against their SEC competition. Like Alabama and Clemson, Georgia has a strong defense (4th in scoring defense), but the Bulldogs are much more reliant on their running backs than true freshman quarterback Jake Fromm. Seniors Nick Chubb and Sony Michel will set the tone on offense, while superstar linebacker Roquan Smith will be patrolling the defensive side of the ball for Kirby Smart’s team.

Of course, Oklahoma shouldn’t just forget about Fromm in any scenario; the young freshman has shown throughout the year that he can make the big passes when Georgia calls on him to do so.