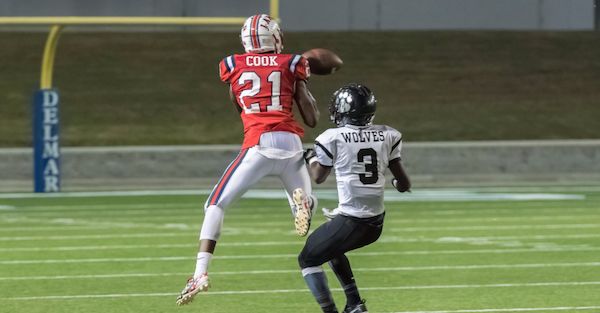 The No. 1 rated prospect in Texas, five-star cornerback Anthony Cook, has trimmed his list of potential schools from 35 to 10.

Thank You GOD for putting me in this Position!! Without You I am nothing. After praying on it, I have decided to focus on these schools🙏🏾🙏🏾 pic.twitter.com/mVkaHDqKX9

The Class of 2018 stud is listed by 247sports as the No. 9 prospect overall in the class, and the No. 2 cornerback overall.

247sports’ Crystal Ball Prediction for Cook is still very much up in the air with Ohio State, LSU and Texas all with a 33 percent chance of landing the Houston Lamar stud.

With Tom Herman in Texas, it should be interesting to see if Cook elects to stay in-state with a rising power in Austin, or go East to one of the schools — like Ohio State and LSU — who have excelled in recruiting over the years.