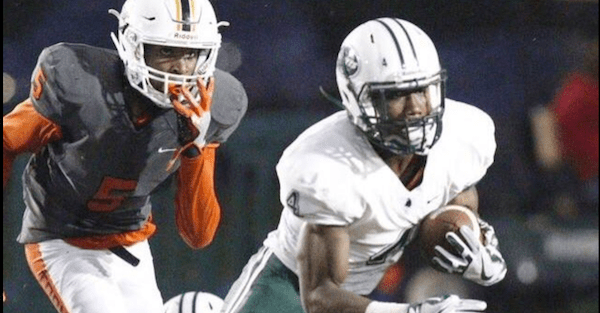 Five-star running back James Cook — the younger brother of former Florida State star Dalvin — has been committed to the Seminoles for a year now, but it looks like the younger Cook is starting to explore other options more and more.

Cook had previously said he is “80-percent” committed to Florida State, and just over a week later, Cook now has a list of his top eight schools.

The top eight, in the order given by Cook: Florida State, Alabama, LSU, Oregon, USC, Auburn, Florida, and Georgia.

Cook said two weeks ago that he was no longer considering a visit to Alabama, and it looks like that might have caught the attention of some of the recruiters at Alabama. Cook has also said that he has plans to visit Oregon, Georgia, USC and Florida, all despite his commitment to Florida State.

Cook is rated as a five-star and as the No. 3 running back in the 2018 recruiting class by the 247Sports Composite.