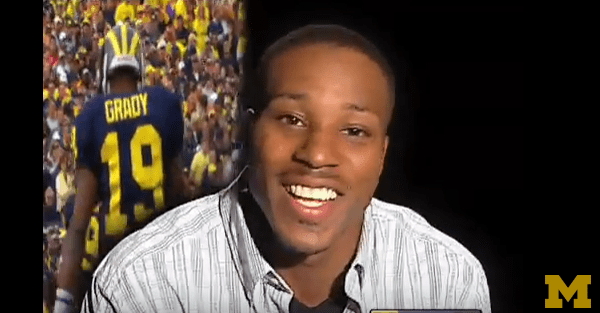 Kelvin Grady, a two-sport athlete at the University of Michigan, faces three charges ? including a felony ? after being arrested on a drug charge.

WZZM-TV, quoting the Kent (Mi.) County Prosecutors Office, said Grady faces a felony charge of conspiracy to deliver manufacture marijuana and two misdemeanors ? maintaining a drug house and possession of marijuana. The station said that as of Friday, Grady was still in jail.

The television station reported that, during a traffic stop, police said they found 13 pounds of marijuana in a car driven by Marquis Dante Turley, and that Grady was a passenger. Turley is out of jail after posting a $100,000 bond after being charged with deliver/manufacture of between 5 and 45 kilograms of marijuana, WZZM reported.

If convicted, both men face up to seven years in prison.

The Michigan Football team once featured Grady it in ?Take Blue? segment