Former No. 3 MLB draft pick to head to college football as a QB 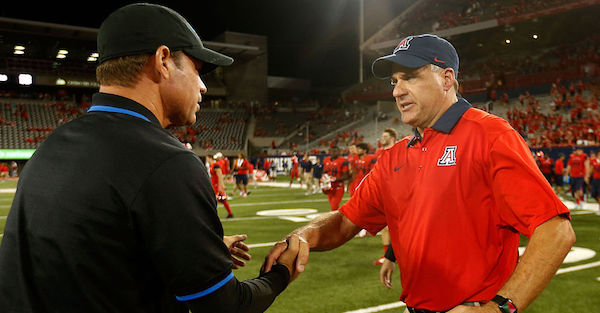 After six seasons as a minor league baseball player, Donavan Tate has decided to give football a try.

Tate’s baseball career didn’t pan out, so now he is enrolling at Arizona to play quarterback for Rich Rodriguez. Rodriguez announced Tate’s arrival at an event on Wednesday, and he called the former baseball player “the natural.”

ESPN ranked Tate as the No. 6 overall athlete in football for the class of 2009 and signed with North Carolina, but he opted to sign with the San Diego Padres after being selected with the No. 3 overall pick in the 2009 MLB Draft.

The QB Arizona is adding is 26-year-old Donavan Tate, former top-five pick in the 2009 MLB draft whose baseball career did not pan out.

Tate earned a $6.25 million signing bonus from the Padres, but he struggled at the plate during his career in the minors. He only batted .226 with 10 home runs in 299 games and he never made it higher than Class A baseball.

In 2011, Tate tested positive for synthetic cannabis, and he was suspended 50 games.

Tate is entering Arizona as a 26-year-old walk-on, but his school will be paid for by the Padres as a part of his contract.

Arizona is in need of a starting QB after Anu Solomon left for Baylor as a graduate transfer. Tate will compete with redshirt junior Brandon Dawkins—who started most of Arizona’s games last year—sophomore Khalil Tate, and incoming freshmen K’Hari Lane and Rhett Rodriguez, who is the coach’s son.