How a boy with Down syndrome, a mother with bone cancer and football stole the weekend 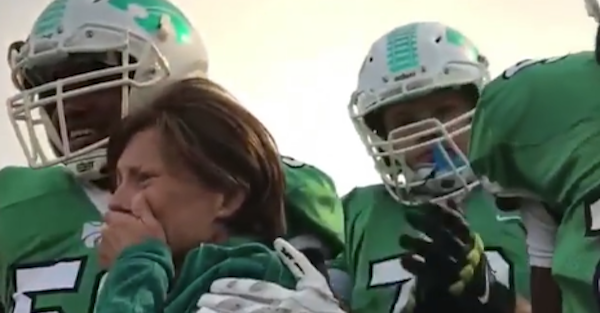 This is the best touchdown you'll see today.

The weekend of football was an action-packed one, but no top-25 matchup or thrilling game had a better story than this one.

WXYZ Detroit (via CBS) shared a story on Novi High senior Robby Heil, who has served as the team’s “hydration manager” and been apart of the team for four years.

Heil has Down syndrome and his mother, Debbie, is terminally ill with bone cancer.

Novi and opposing high school South Lyon East agreed before the game to give Heil his proper opportunity in the spotlight. That’s when, during a stoppage in play in the second quarter, Heil took the field, received a handoff and sprinted into the end zone for a touchdown.

Special night for the number one player of the game tonight: #24 Robby Heil pic.twitter.com/2A4vvIEiDF

As you can see in the video above, his mother was overcome with joy:

“I dropped to the ground because I was so emotional when I saw him make that touchdown,” Debbie Heil said. “I’ve always been proud of him being the water boy, or as people call him the hydration manager, but this was incredible. He’s Rudy tonight. He’s Rudy.”

It’s certainly a moment the boy, his mother, and those around him will never forget.