Did Jalen Ramsey just say he wanted Francois at QB over Golson in 2015? 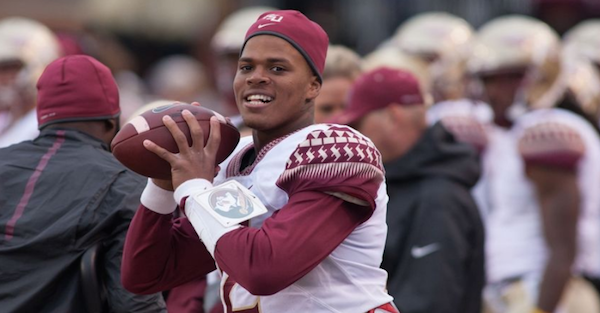 Florida State redshirt freshman Deondre Francois is currently expected to start for the ‘Noles in the season opener in Orlando, Fla. against Ole Miss. Francois being thrown into the starting role wasn’t exactly planned — redshirt senior quarterback Sean Maguire underwent surgery early this week, as he needed a screw put into a foot. The timetable for Maguire’s return is approximately 4-6 weeks.

Francois was in the mix a little bit for the quarterback battle last year between Maguire and graduate transfer Everett Golson, who wound up winning the job over Maguire. However former FSU cornerback Jalen Ramsey told FSU News that he wouldn’t have minded Francois, who last year was a true freshman, to start over Golson or Maguire.

"I'll put it this way, I would have been comfortable with him leading us last year."

Francois has been performing well since he’s taken over the starting duties — during Wednesday’s scrimmage he had three touchdowns and only interception, the Orlando Sentinel.

Francois as a recruit in was a four-star, and was the No. 3 ranked dual-threat quarterback for the class of 2014.