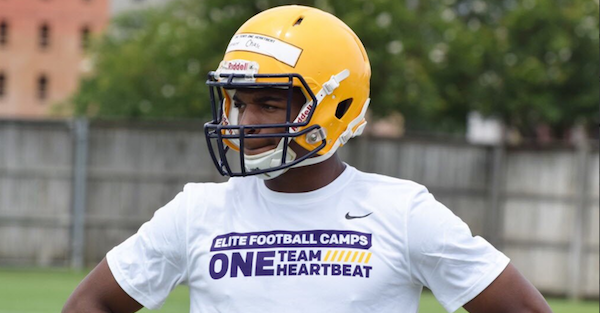 Four-star wide receiver Ja’Marr Chase was expected to announce his college decision between TCU and LSU on NFL Network during Nike’s The Opening on Monday.

But at the last second, the network changed his time slot to air the commitment of defensive end Greg Emerson, who is a more highly ranked prospect. According to NOLA.com, Chase’s commitment was bumped back and the network didn’t give him another time to commit on air.

Sounds like that surprise TV commitment from Greg Emerson bumped Ja'Marr Chase from his time slot. NFL Network is debating next step now.

Chase handled the situation well, and he tweeted that he’d decide on what to do with his family.

I'll make something up when I go home, I'll do it will my family. Thanks for the support everyone. 🙏#BlessedandThankful

NFL Network has recently devoted more attention to the recruiting process, so the company doesn’t have much experience in this realm. But it isn’t a good look for the network to completely disregard a recruit’s commitment time in favor of another prospect.

To make matters worse, Chase was initially planning to announce his decision on July 2, which is his grandmother’s birthday. Chase wanted to honor his grandmother with a commitment on that day, but representatives from NFL Network asked him to change it to July 3 so they could air it live.

Of course, when Emerson wanted to announce his decision, they changed courses for Chase yet again. Chase didn’t complain publicly and handled the situation very well. Representatives from NFL Network probably won’t admit to being at fault, but they definitely made a huge mistake.