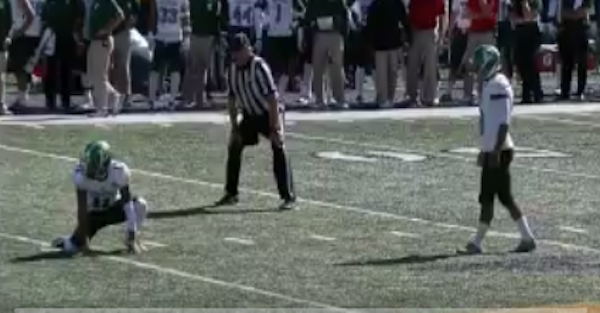 Something was definitely wrong with the CBS broadcast of Eastern Michigan-Toledo.

Apparently the color commentator was watching a totally different game as he botched  an obvious wide-right field goal attempt call as having “just gone over the cross-bar” and tying the game.

See for yourself below:

Most awkward moment ever? This announcer must be watching a different game 😂😂😂 pic.twitter.com/3LtTqmcSXM #CFB #EMUvsTOL

Perhaps the best part about this incident is that the color commentator is former Pro Bowl kicker Jay Feely, according to AwfulAnnouncing.com‘s Week 6 announcing schedule. Feely later tried to clarify, only making the situation stranger:

If there’s anyone who should’ve called that play correctly, it’s a former 14-year NFL kicker. I don’t know what Feely was watching, but perhaps it was more exciting than a 3-0 Eastern Michigan-Toledo game.