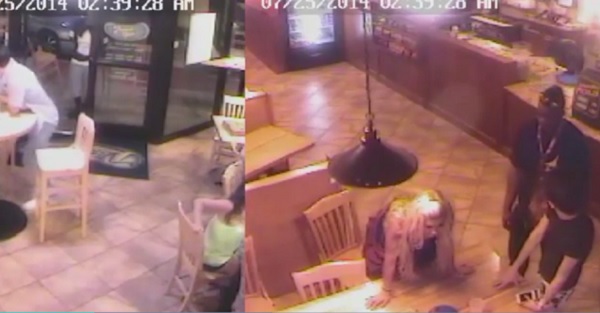 Joe Mixon was suspended for the entire 2014 college football season due to an incident where he punched a woman in the face. After two years, video of that incident has finally been made public.

After an Oklahoma Supreme Court decision compelled the video to be made public, Mixon and his attorneys finally released the video on Friday. In the video, Mixon is seen getting into an argument with a woman — identifed as Amelia Molitor — in a Pickleman’s Gourmet Cafe. The part of the argument seen on camera escalated into a physical confrontation, as Molitor pushed Mixon multiple times before Mixon punched Molitor in the face.

Mixon was charged with a misdemeanor for the punch, resulting in probation and a one-year suspension from the Oklahoma football team. Molitor suffered facial fractures from the punch.

According to NewsOK, Molitor is currently suing Mixon in Oklahoma federal court.

Molitor, 22, is suing Mixon, 20, in Oklahoma City federal court for punching her in the face inside Pickleman’s Gourmet Cafe early in the morning on July 25, 2014. U.S. District Judge Joe Heaton last month dismissed two of her three claims.

Mixon is raising a number of defenses to her remaining claim — intentional infliction of emotional distress. His attorneys assert, for instance, that Molitor “by her conduct contributed in whole or in part to any claimed loss or injuries.”

Per NewsOK, both parties of the lawsuit indicate that the confrontation originally started outside the Cafe. Where the stories begin to disagree is why Mixon then entered the cafe after Molitor entered. Mixon claims that Molitor motioned for him to follow her to the table, where the argument then resumed. Molitor claims Mixon initiated the argument in the cafe before it became physical.

After serving the suspension in 2014, Mixon has since become a key contribute for the Sooners football team. He was Oklahoma’s leading rusher in the 2016 season, where the Sooners are 10-2 and heading to the Sugar Bowl to face Auburn.