Transferring in college football is nothing new, but it's full-blown free agency these days. New rules allowing players to suit up immediately, NIL deals and the transfer portal have made it more enticing than ever to move schools. Roster overhauls are a part of the game now.

JT Daniels was never supposed to transfer from USC. Yet, in 2022, Daniels is suiting up for the third team of his college career. It's not the route the sixth-ranked player of the 2018 recruiting class had in mind coming out of high school, but he's learned to roll with the punches as well as anyone.

Before Daniels takes the field for the West Virginia Mountaineers for the first time, let's take a look back at how he got here. 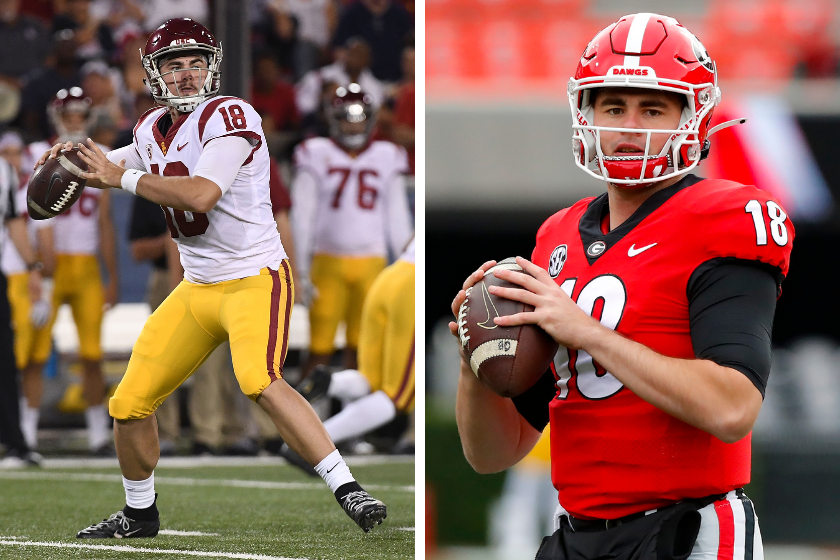 Daniels won the starting job at USC as a true freshman back in 2018. He had a decent year, throwing for 2,672 yards and 14 touchdowns against 10 interceptions while the Trojans finished 5-7. As far as freshman QBs go, there was a lot to build on, and Daniels showed signs he would be under center in Los Angeles for a long time.

That is until the first game of his sophomore season against Fresno State. Daniels tore his ACL after getting sacked in the second quarter. The injury ended his season and effectively ended his career at USC. Freshman quarterback Kedon Slovis took the reigns and threw for 3,509 and 30 touchdowns en route to an 8-5 record.

Slovis proved himself to be the guy, so Daniels transferred to Georgia in 2020. He ended up behind D'Wan Mathis and Stetson Bennett on the depth chart, but after Mathis performed poorly and Bennett suffered a shoulder injury, he started the last four games of the season. Daniels led the Bulldogs to four wins, throwing for 1,231 yards and 10 touchdowns in the process.

The starting job was Daniels' heading into the 2021 season, and he was even projected to be the No. 1 pick in the 2022 NFL Draft at one point, but after Daniels suffered an oblique injury against Clemson in the season opener, Stetson Bennett stepped in and secured the job for the rest of the season. Although Daniels caught the short end of the stick, Bennett led Georgia to a national championship.

Following two injuries at two schools and two replacements who took advantage of their opportunities, Daniels transferred to West Virginia.

What to Expect From Daniels at West Virginia

Neal Brown: ?he?s earned the right. Decision making is what won the job for him.. I have a lot of confidence in him and how he will start in the opener? pic.twitter.com/NYsyAIOp3E

West Virginia head coach Neal Brown named Daniels the starter ahead of their season opener against archrival Pittsburgh. Ironically, Slovis will start for Pitt. The quarterback arrived in Morgantown after spring practice had wrapped up, but he has steadily integrated himself with the offense.

"JT is experienced," Brown said, per On3. "He's mature. We've talked about his intelligence. I think his timing has improved as he's gone because we forget -- the summer workouts are so different as far as throwing full speed. We'll do some OTAs but you're not necessarily throwing and you're not throwing against the defense. He's just had these 14, 15 practices to really get his timing down and you can see that improving."

Daniels enters the season in as unique position as anyone in college football. He has the talent, he's had his ups and downs, he's been around winning, but he's had trouble staying healthy. And when he's been out with injuries, the guy waiting in the wings has exceed expectations.

As his college career comes to a close, Daniels is ready to prove why he was one of the highest-rated players in his class.