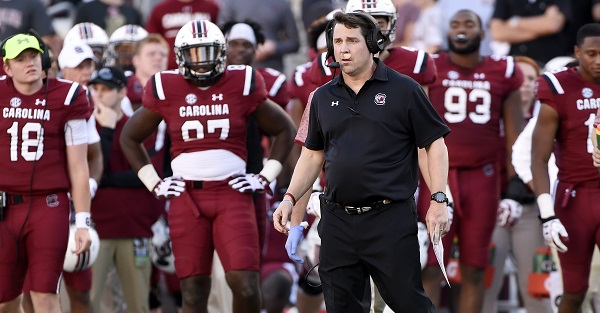 Todd Bennett/Getty Images
COLUMBIA, SC - OCTOBER 9: Head coach Will Muschamp of the South Carolina Gamecocks waits for his team on sidelines during a timeout by the Georgia Bulldogs during the fourth quarter on October 9, 2016 at Williams-Brice Stadium in Columbia, South Carolina. (Photo by Todd Bennett/GettyImages)

South Carolina head coach Will Muschamp and Georgia head coach Kirby Smart are long-time friends dating back to their time in Athens. With that said, the two men are now direct competitors as heads of programs in the SEC East and that brings about some conflicts of interest.

Jason Butt of Macon.com brings word of another one, albeit playful, as Muschamp took to the radio airwaves on 680 The Fan in Atlanta to prod Smart about UGA’s Spring Game attendance.

“Muschamp called me and said we would not even get (40,000). If everybody knows Muschamp at South Carolina, he’s calling me out. I figure we will get that. He is calling the Dog fans out.”

Last season, Smart and company generated attendance of more than 90,000, including an appearance from Ludacris as entertainment. Obviously, that is not a sustainable model for the “G-Day” proceedings but this seems to be a clear tactic from Smart to help generate some additional bodies at Sanford Stadium when the team takes the field to end spring practice.

Georgia got the best of the 2016 matchup between these two programs and, if we’re honest, the Bulldogs are the better program right now. Still, Smart and Muschamp could be doing battle for a long time and this is an interesting use of propaganda from UGA’s head coach.