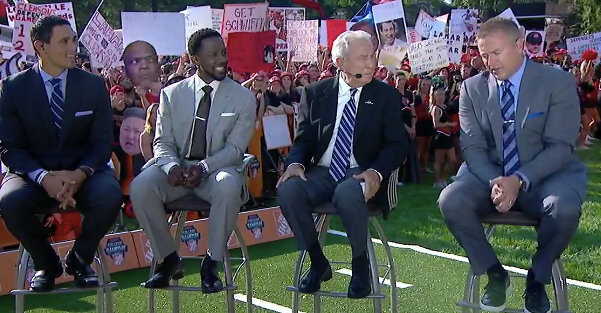 The Ohio State Buckeyes struggled mightily on the offensive side of the ball in a loss to the Oklahoma Sooners and quite a bit fo the focus was on the play of veteran quarterback J.T. Barrett. While he wasn’t terrible in the game, Barrett failed to kick start Urban Meyer’s offense and, as a result, five-star offensive tackle prospect Jackson Carman let his voice be heard on Twitter that he was time to go from Barrett to backup Dwayne Haskins.

OSU game this past weekend, they need to put in my bro @dh_simba7 and let him work ‼️ pic.twitter.com/9X1Cpcfiey

From there, Ohio State alum and ESPN analyst Kirk Herbstreit fired back with a message directed at “all recruits of every school” to refrain from this kind of social media behavior.

On cue, Carman went back at Herbstreit with an entitled stance about how this type of thing would play in the locker rooms for Clemson or USC.

Pretty sure I wouldn't have any problems in Dabo Swinney's or Clay Helton's locker room for my OPINION on OSU's qb issues. 🤔 https://t.co/FMVwGpAJ2J

Things continued on Twitter with various Ohio State prospects and current players chiming in but, on Saturday, Herbstreit had the floor on ESPN’s College GameDay and he addressed the issue head-on.

It isn’t a surprise to hear Herbstreit saying that he wouldn’t recruit a player that did what Carman did, if only because it would almost certainly cause friction in the locker room if the prospect actually enrolled. Yes, Barrett is a senior that will be departing but Carman could even get to Columbus but there would be plenty of Ohio State players left over that may not treat the youngster kindly as a result of his public sentiment.

Most people have agreed with Herbstreit on this, especially given the credentials he possesses and the ties to the Ohio State program. It is entirely possible, though, that the saga isn’t over just yet.