Lane Kiffin ready to take after his “hero” in press conferences 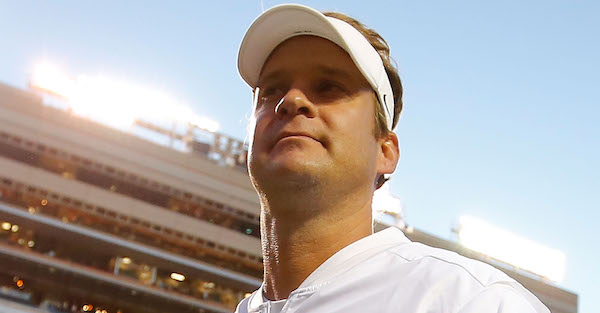 Leach is known just as much for his antics in interviews as he is for his skill on the sideline. He is 122-80 overall as a head coach and most recently, 38-37 in six seasons at Washington State, but he’s also produced moments like this hot take on college mascots.

I could listen to #Wazzu coach Mike Leach talk mascots all day.

So yeah, Leach is known to be a bit of a character, and apparently one of his colleagues — another coach known for off-field antics — looks up to the Cougars’ head coach. That would be none other than Lane Kiffin, who recently tweeted about another epic rant Leach went on, this time about the College Football Playoffs.

This is my hero in press conferences. Keep being you Mike. It's a good way to live being real. More people should try it @CollegeGameDay @WSUCougars https://t.co/fwFykLpxpV

And for the uninitiated, here’s Leach’s take. Some of it was transcribed by USA Today. The rest can be watched below in the Darren Rovell tweet Kiffin retweeted:

“These guys, you know, they win a certain number of games, they have a qualification. OK, now, boom! They’re in the playoffs. But they don’t have just two or four teams or something – hell no – because they want everybody to have fun and enjoy this playoff system. So they have 16 or 32 or 64 or something like that.

“OK, so then they play each other, and everybody’s on the edge of their seat, gotta wait and see if this team’s gonna beat that team or beat the other team. And so then, in the end, there’s occasionally a debate. ‘If only this team hadn’t lost to that team in this round, then this team could have won the whole thing,’ and that’s perhaps true. But the thing that is indisputable is that at the end of the gauntlet, this team came out No. 1, and there’s no debate, whatsoever, who’s state champion.”

There is no one who explains sports, or life for that matter, like Mike Leach. ICYMI, his latest take — the college football playoffs pic.twitter.com/IVQlPuiFYZ

Leach’s whole point in the above argument is that there’s a lengthy playoff in just about every other level of football, but apparently, DI college football is content to only feature four teams in the CFP.

As Leach stated, high school playoffs usually feature a number of schools and the same can be said of DIII and DII football, which boast very intriguing playoff formats. And of course, there’s the NFL, which features six teams for each conference, ultimately ending int he Super Bowl.

Big playoff fields seem to be a way of life in football, and apparently, Leach can explain it better than most.

Just ask Kiffin, who might start taking press conference pointers from his hero.