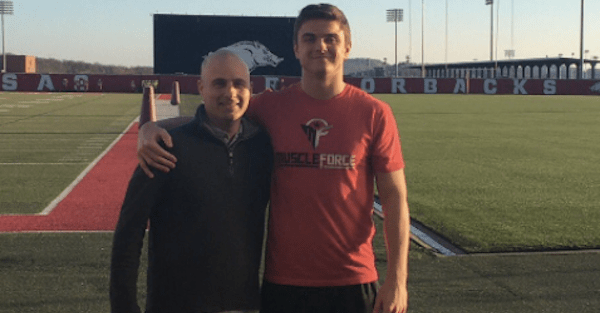 Luke Ford was once set to join the Arkansas Razorbacks, as the four-star tight end was committed to the program until very recently. Now, the recruiting world has its attention focused on the talented rising senior and that includes the University of Alabama.

Hank South of BamaOnline brings word that Ford visited Alabama over the weekend and, in short, it appears as if Ford was blown away by what he saw.

“It was unbelievable. It was amazing. They rolled out the crimson carpet, so to speak. The coaching staff was great. I loved meeting with the new OC, who is obviously keen on using tight ends, so it looks like it’ll be a good place, for me at tight end, to come. I was just blown away.”

Later, Ford was asked if he felt the Alabama staff was holding him in high regard as a priority.

“I think so for tight end. They are still kind of in the evaluation series, but after watching what I did today it’s more of the recruiting series for me. They’re showing a lot of interest in me. It looks like they really, really want me. It’s going to very hard to say no to Bama. Very, very hard.”

The 247Sports composite ranks Ford as the No. 4 tight end in the country and, with that, the 6’7, 250-pound tight end is among the top 100 prospects overall. At this point, it appears that Alabama is the favorite, with a big Crystal Ball lead and a growing notion that no program can unseat the Crimson Tide.

Still, it is never over until it is over on the recruiting trail and the report indicates that both Auburn and LSU will be hosting Ford for visits in the near future. Get your popcorn ready.