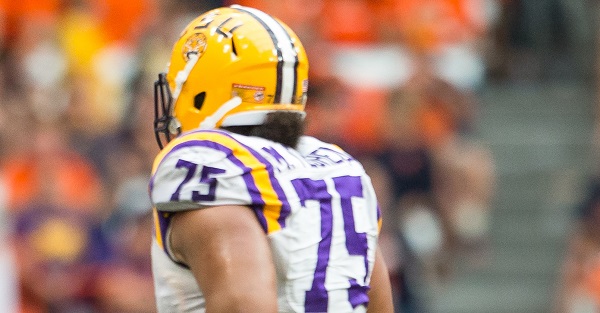 The college football world has known since early August that former LSU five-star offensive lineman Maea Teuhema was on the market as a transfer. That came after a sequence of events in Baton Rouge that included a suspension and a subsequent release and, after a few weeks of intrigue, word broke earlier this week that Teuhema is headed to Southeastern Louisiana to join the program.

In an official release, SLU head coach Ron Roberts embraced the addition of Teuhema with the following sentiment:

“We’re excited to have a player of Maea’s caliber join our program. He brings a lot of experience and it will be good to add another talented veteran to what is already a group we have a lot of confidence in.”

“Maea plays with the physicality we’re looking for up front. He’s joining a great group of offensive lineman and now that he’s one of us, his teammates will welcome him with open arms.”

Per the official announcement, Teuhema will be available immediately at SLU and that is a coup for his new team. He was an impactful player at LSU over the last two seasons and at least one publication ranked him as a five-star prospect before he enrolled. The talented offensive lineman clearly encountered a rough patch at his previous stop but the sky is the limit for Teuhema in his new landing spot.