Marcus Freeman strutted his way to the podium inside Notre Dame's practice facility on December 3, 2021, right before he'd be officially announced as the school's 30th head coach. He was holding the hands of two of his kids while his wife, Joanna, served as the caboose of the Freeman family caravan.

Everyone knows the old (and probably outdated) adage. "Behind every great man is a great woman." As Freeman made his way to his introductory press conference, there was Joanna right behind him just as she always has done at every stop of his career.

Freeman was quick to thank his wife during that speech, showing just how family-oriented he is.

From numerous coaching jobs to a medical discovery that ended Freeman's playing career early, Joanna has been a staple who's been there by his side.

It's fitting that Freeman's first game as Notre Dame's head coach will come against Ohio State. He played his football there and was a two-time second-team All-Big-Ten selection at linebacker.

Columbus is also where Freeman met Joanna. A picnic after the 2005 Ohio State spring game brought the two together. They've been breaking bread with each other ever since.

Joanna is a former Columbus news reporter, according to the Beacon Journal. Raised in Ohio, Joanna graduated from Massillon Washington High School and attended Otterbein University.

Freeman was drafted by the Chicago Bears in the fifth round of the 2009 NFL Draft. He wouldn't play for long, though. The following year, just before he married Joanna in 2010, Freeman was told by doctors during a physical that he had enlarged heart. His playing career was over. 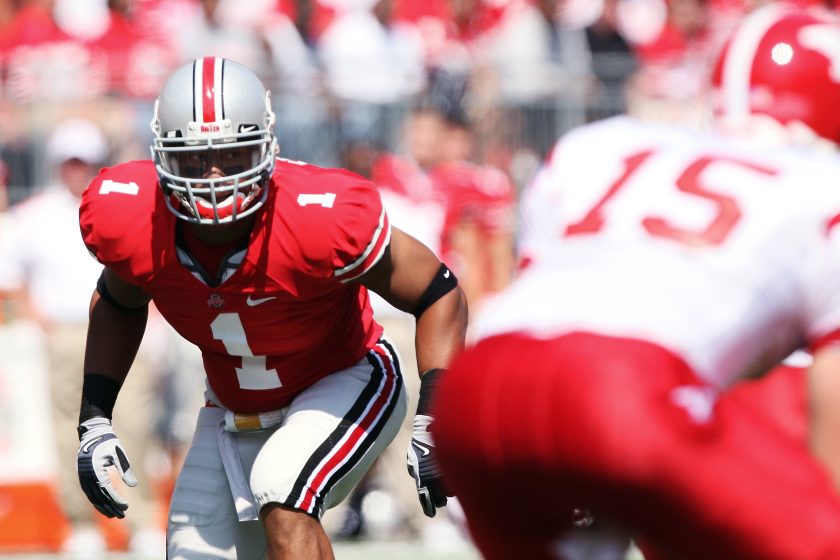 "He was pretty calm about it. He could have gone into quite a depression. But he took it with such grace. He knew it was a blessing that we found out about this, whether it was a week before our wedding or not. He knew there was a different plan for him and he trusted God," Joanna told the Beacon Journal.

"It was hard to hear that football was being taken away, but life is much bigger than that for me," Freeman said at the time. "Sooner or later you're going to be done. Even though I can't play anymore I still have a love and a passion for it. I'll just turn the page to the next chapter in my life."

Freeman was offered a spot on the Buckeyes coaching staff as a graduate assistant by Jim Tressel. He fell in love with coaching, making stops at Kent State, Purdue, Cincinnati and, finally, Notre Dame.

And it's in South Bend that he's turned the football program into a family-centered atmosphere.

The Reason Marcus Freeman Brings His Children to Practice

Freeman's players clearly love him. His family definitely loves him. There isn't anyone at Notre Dame that doesn't love him.

And it's because he's a genuine person who still makes time for his family despite a regimented schedule and a job that requires overtime on a daily basis. How does he do that? By taking his kids to practice. It's a also a way to set a good example for his other kids -- his players.

"I want our players to see their coaches as fathers," Freeman said this year. "I think there's power in that. Yeah, we're going to help you with football, we're going to help you be great football players, but I hope that you're a better husband and father because of the time you spent with us. It's not the things we say as much as, hopefully, the actions. They see us playing with our kids. They see us as husbands. We have them at our house.

Marcus and Joanna have six children together: Vinny, Siena, Gino, Nico, Capri and Rocco. He also has another daughter, Bria, who Joanna is a stepmother to.

The Freeman family has been by his side since day one. They walked hand-in-hand before his introductory press conference, and they'll likely do the same before he makes his Notre Dame head coaching debut.

MORE: 5 Notre Dame Players Who Will Get the Irish Back in the Playoff Picture