It is pretty clear who the top teams in the Big Ten Football Conference are: The Ohio State Buckeyes, the Michigan Wolverines and the Penn State Nittany Lions.

From recruiting to 10-win seasons and conference titles to New Year's Six Bowls and College Football Playoff appearances, those three have it all and, for the most part, have been pretty consistent. Michigan's success has only been recent, while Penn State has fallen off in the wins category in the two seasons prior to the 2022 campaign. But those two have made an impact in college football. And, of course, there is Ohio State, but its resume speaks for itself.

What About the Rest of the Conference? 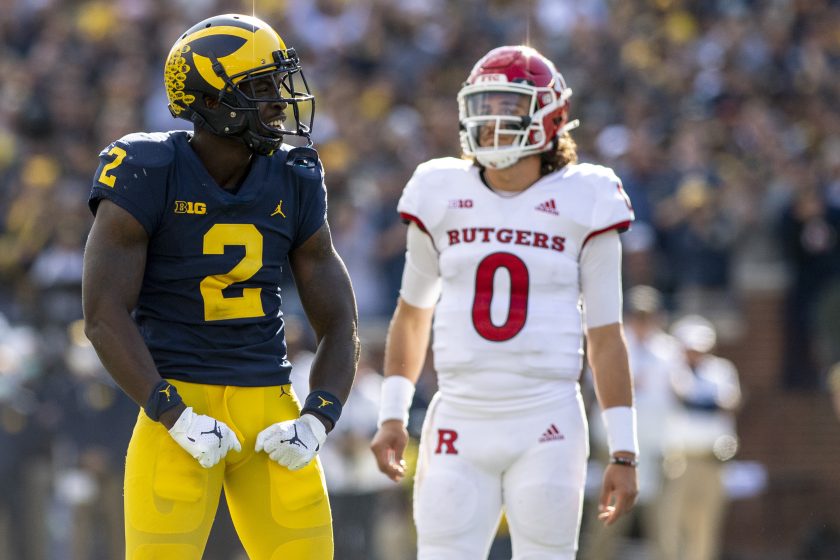 Well, to round out the rest of the East, the Michigan State Spartans have made a playoff appearance and have a Big Ten Title. The Indiana Hoosiers are average -- most seasons -- but pick-up upset wins almost every season. And although their record does not show it, the Maryland Terrapins have recruited exceptionally well and have shown signs of improvement over the past few seasons. And then there is Rutgers. ... that's it.

So, the East Division has its top dogs, its middle-of-the-road teams who have a good season from time to time, and the bottom of the bucket. But what about the West Division?

The Wisconsin Badgers for most of the last decade have been the best team: winning the division, a couple conference titles and appearances in New Year's Six Bowl games. They are followed by Iowa, whose defense is usually one of the best while its offense is usually pretty stagnant, and it almost seems that the Hawkeyes are always finishing with four to five losses. Both teams are having a hard time keeping their claims as the top teams in the West.

Over the last four seasons, each has made the Big Ten title game, losing by a combined score of 87-27. Neither has won a Big Ten Title since 2012. And since the divisions were realigned in 2014, no team in the West Division has won the Big Ten title. But Wisconsin and Iowa are not the only teams representing the West to have made it to the title game. The Northwestern Wildcats made two appearances (2018 and 2020), following each of those with 3-9 seasons.

The two top teams, Wisconsin and Iowa, are showing signs of falling off, and even when they made the title game, they never won. And the third team, Northwestern, cannot decide whether they want to win the West or finish with just three wins. But there are four other teams in the West. Shall we review?

The Minnesota Golden Gophers had a resurgence in its program in 2019, winning 11 games but losing two of the last three games -- missing out on a Big Ten title game appearance. Including this season, they are 10-9 over the last three seasons in conference play. The Purdue Boilermakers are the Indiana Hoosiers of the West: picking up big wins, and playing really tough but never really living up to expectations. Then you have Nebraska, which once was a big-time football program but now is searching for a new head coach. Lastly, you have Illinois, which aside from a strong finish in 2021, and a great start so far in 2022, has been the bottom feeder of the conference for quite some time.

That's a lot to take in. And there are a lot more stats and analytics confirming that the West Division is mediocre, inconsistent, lacks dominance and is nowhere near its counterpart that is the East Division.

And there is the obvious: the UCLA Bruins and the USC Trojans are set to join the Big Ten Conference. Geographically speaking, they should be placed in the West division with what my guess would be, Purdue, switching to the East to even things out. There are talks of them assembling a schedule similar to that of the one the ACC will dive into next year, but that is hypothetical. Or it could resemble something like this:

What do you think of my new Big Ten divisions if Oregon and Washington also join UCLA and USC?

But aside from USC and UCLA, the West Division needs to increase the consistency of its play. People may argue that a division champ with two to three losses means it is just a competitive division with good teams when it is the opposite. You have three to four teams which are splitting games amongst one another. Then when it comes to playing the East, they do not show up the majority of the time. A two or three loss division champ means that your division is average. There is no separation in terms of talent and power -- not only in the standings but out on the field as well.

It was great seeing Minnesota in 2019, Northwestern in 2018 and 2020 and Illinois this season but it doesn't matter if nothing is being built on that success in the following seasons. Someone in the West needs to take control before the addition of USC and UCLA, and other teams need to mirror that of the upper-middle of the East Division. Make things interesting, have consistency and do something no team has done before out of the West: WIN. THE. CONFERENCE. TITLE.