The swag-tastic necklace was beloved by Hurricane fans and mocked by the rest of college football, but it's being discontinued in 2022. New Miami head coach Mario Cristobal said at a press conference this year that "it's not part of our culture" and that the school was "moving in a direction that doesn't involve it."

If anything, the chain's five-year run was entertaining. The stone-filled chain received major upgrades each season since 2017, meaning Miami spent some serious coin over the years on flashy jewelry only for it all to be a waste.

Miami's Original Turnover Chain: The U 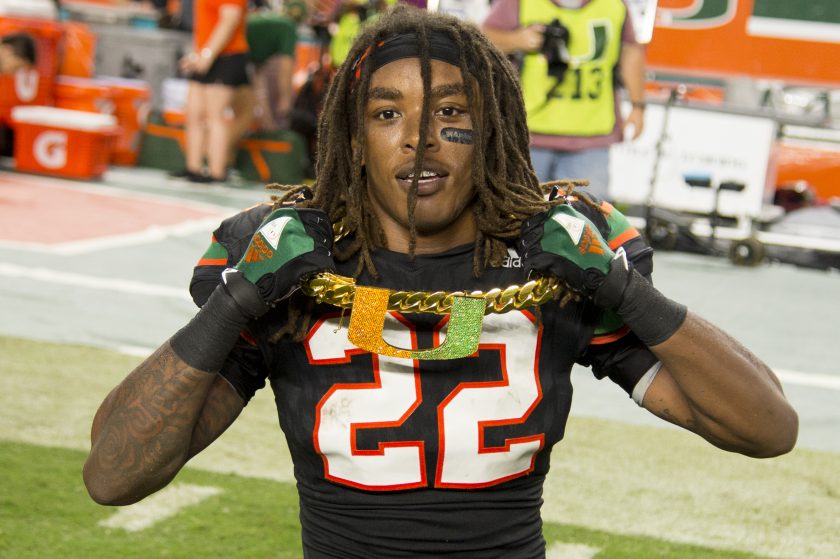 "The U" chain with orange and green stones from the 2017 season is the original, but it was scrapped. The original turnover chain got replaced by UM mascot Sebastian the Ibis rocking an orange jersey and it supposedly came with a nice price tag. The original version was also for sale in 2021, but as an NFT.

Made by AJ The Jeweler, the 2017 edition with the encrusted "U" featured 900 orange and green sapphire stones, measured 5.5 inches and weighed 4.4 pounds. It was great and the Miami Hurricanes wore the link chain often with 30 turnovers in 2017.

The 2018 version featuring Sebastian the Ibis was 8.5 inches, had over 4,000 stones and weighed 6.6 pounds. Talk about a major upgrade.

Miami?s new turnover chain made its debut. Some stats from @CanesFootball on the charms, both made by AJ The Jeweler:

So how much did the 2018 chain cost? One guy reported a price tag of $98,456, a number that was also reported by Canes Insider.

It's hard to believe that's true, that the chain awarded to Hurricanes players on the sideline for creating turnovers had nearly a six-figure price tag. After all, it's just Twitter and people love to make things up all of the time.

Let's say it is true. Do we even want to have the conversation on who fronted the bill for the new turnover chain? Better yet, who approved purchasing it in the budget?

Regardless of the price tag, the new chain was heavier, longer, featured over 3,000 more stones, and the Miami fans absolutely loved it. Trajan Bandy was the first player to rock the new turnover chain in the first half of the 2018 home opener for his fumble recovery in the second quarter against Savannah State. 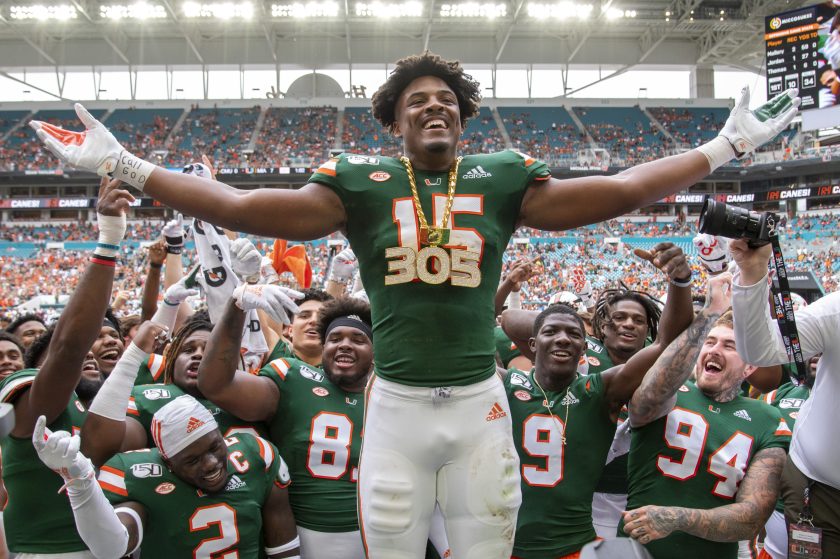 The Manny Diaz era didn't exactly start how University of Miami fans wanted. A loss to the Florida Gators on Saturday night at Camping World Stadium in Orlando was not ideal. However, there was some good that came from that football game, including an introduction to the latest and greatest turnover chain.

This turnover chain was flashy and absolutely full of swag. It brought back "The U" and also included Miami's 305 area code.

From touchdowns to takeaways, Miami football games were must-see because of the jewelry.

Thank you so much, @AlBlades_Jr.

Just when you thought Miami's turnover chain couldn't get any better, it most certainly did.

Created by jeweler AJ Machado, the 2020 version was unveiled after Al Blades Jr.'s interception in a matchup against Louisville on September 19, 2020.

According to the South Florida Sun Sentinel, this version featured a 32-inch, 10-karat gold Cuban-link chain. On the charm, the state of Florida is in white, while the South Florida tri-county area is in orange and green.

It contained approximately 1,900 white sapphires, according to CBS Sports.

The best part, however, is the "U" logo over the state. Conveniently, it covers the cities of Miami's biggest in-state rivals -- Florida and Florida State.

Miami was the site of ESPN's College GameDay on September 26 before its rivalry game against FSU.

The coronavirus pandemic and COVID-19 outbreak made the NCAA season interesting, to say the least, but it didn't stop the Miami football team from making the turnover chain a trending topic once again.

The price of the 2020 chain is unknown, and Machado won't disclose, but it definitely does not look cheap.

Miami's 2021 Turnover Chain: The Last One 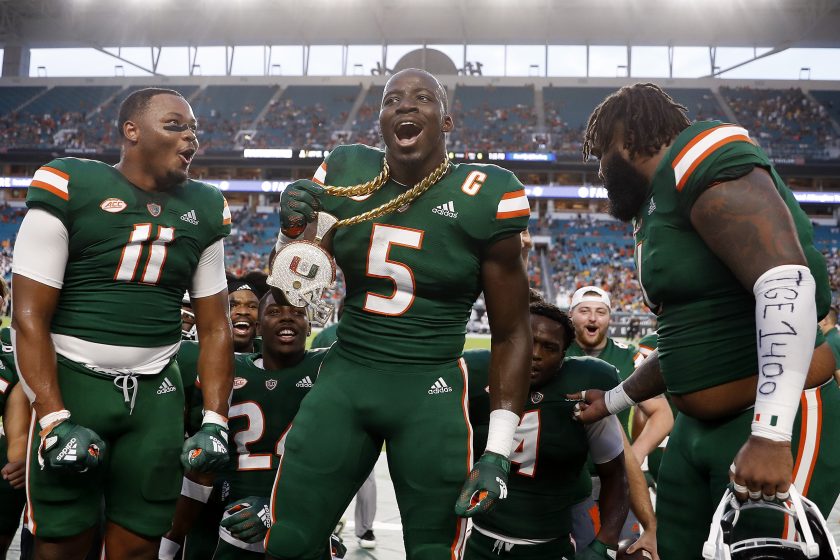 The University of Miami teased fans before the season, because there's no way there wasn't going to be a new chain in 2021.

The 2021 version was a massive Miami helmet yet again covered in stones. While the cost was unknown, it's pretty clear that Miami paid a pretty penny for it. Though the best moment came last season when the 'Canes were down 27-0 to Alabama. After a turnover was reversed, they had to put the chain back in the box, leaving the internet to roast them.

Miami had to put the turnover chain back in the box ???

Hey, maybe it's a good thing the team that recorded just 11 turnover in 2021 -- a number that has been declining each year since 2017 -- has finally gotten rid of the chain.

This article was originally published September 11, 2018. It had been updated after each chain was released.