College football rivalries are what the sport is all about. The other 11 games on the schedule are nothing compared to squaring off against the team whose colors make you sick to the stomach. Rivalries are nothing without history, and what better way to celebrate history than with a commemorative trophy?

Several heated matchups around the country award trophies to the winner. Most of the them have a historic significance. Others were started on the Internet. Then, there are some that are purely random.

The original Jeweled Shillelagh ? retired in 1997 ? made its triumphant return to Notre Dame Stadium.

No. 13 @NDFootball will battle Southern Cal for the second iteration of the famous traveling trophy, Saturday at 7:30 p.m. ET.#GoIrish #BeatSC pic.twitter.com/meElpT3ZnW

The winner of the USC and Notre Dame annual matchup wanted more than bragging rights when the two powerhouses first faced off in 1926. So, they also played for a jeweled shillelagh, or an Irish club in layman's terms. The winner of the game adds its own unique jewel to the trophy.

Platypus Trophy goes to the winner of the Oregon-Oregon State game. Here?s the trophy ? and the man (Warren Spady) who carved it for the rivalry in 1959.#GoDucks and #GoBeavs meet on Saturday at Autzen Stadium. pic.twitter.com/U0CapjQxlu

Oregon and Oregon State played their first football game in 1894. The winner of the 128-year-old rivalry, formerly known as the Civil War, receives the Platypus Trophy. Platypuses have a deep-rooted history in the Pacific Northwest....of Australia. Nonetheless, the animal was chosen because of its duck-like beak and beaver-like tail--paying homage to each school's mascot. 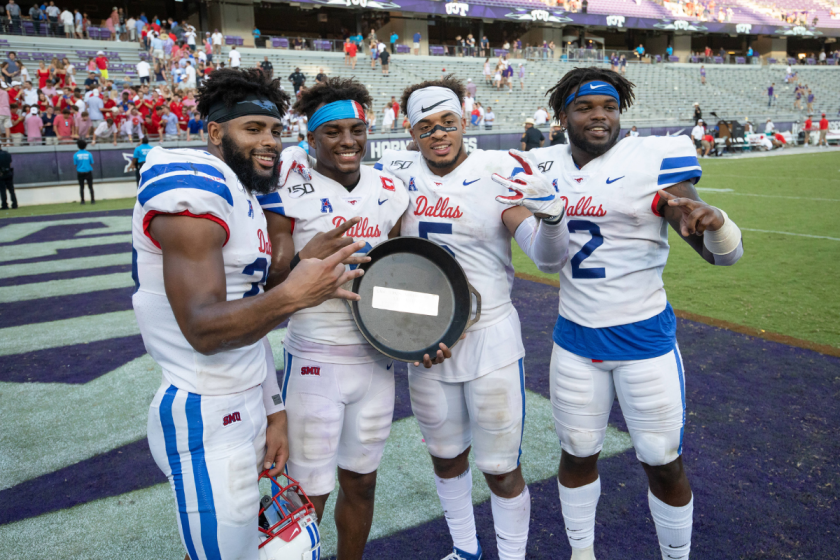 Back in 1946, a SMU fan allegedly fried frog legs before the Mustangs' annual showdown against the TCU Horned Frogs. A TCU fan saw and suggested the pan should be awarded to the winning team. So began a long Dallas-Forth Worth tradition. 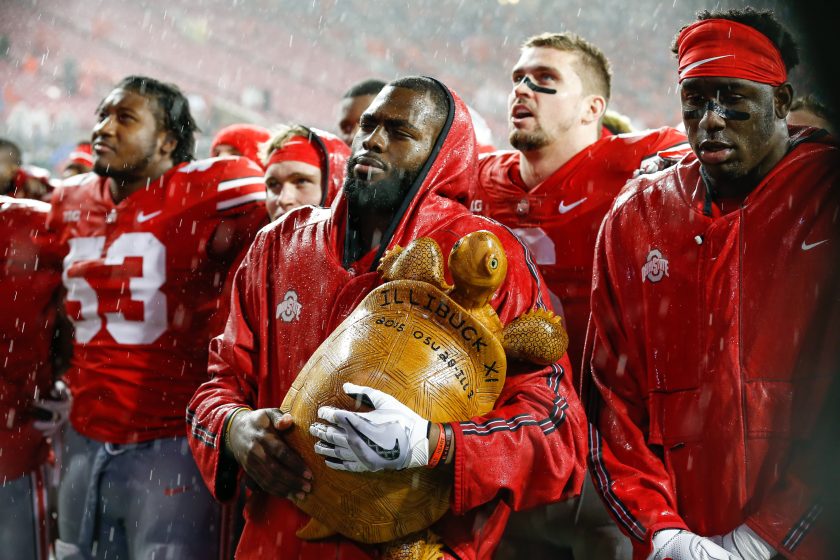 You can't think of Illinois and Ohio without thinking of turtles. In 1925, 22 years after the rivalry began, someone came up with the idea of awarding a live turtle to the Illinois and Ohio State winner to symbolize the rivalry's longevity. When the turtle died four years later, a carved wooden turtle took the mantle and has been used ever since.

Minnesota might as well have a rivalry trophy with every team in the Big Ten. The Gophers have five -- count them -- five rivalry trophies across the conference. The most recent is the $5 Bits of Broken Chair Trophy with Nebraska. Started in 2014 from a Twitter exchange between Goldy the Gopher and Bo Pelini parody account "Faux Pelini," the trophy has become the people's hardware of the Big Ten West matchup regardless if the universities acknowledge it or not.

3. Battle of the Bones: Memphis vs. UAB

Here's some more views of Memphis/UAB's Bones Trophy, created by UAB Art Studio Lab Supervisor Heather Holmes in 2006. Memphis won the last one, UAB is up 10-5 in the series. pic.twitter.com/E4yLuzYC7W

Memphis and Birmingham have a reputation for delicious barbecue. What better way to show appreciation for the shared culinary history than with a 100-pound bronze slab of ribs? 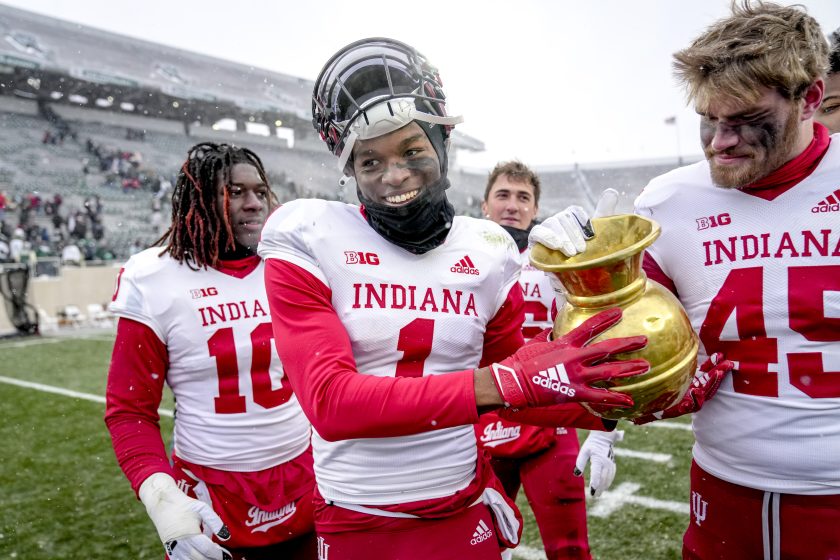 In 1950, the Michigan State Spartans needed a reason to get amped up for Indiana after losing a heartbreaker to Notre Dame. Members of the student body went out and figured a spittoon would be worth playing for the next week against Indiana. It somehow worked and has been a staple of the rivalry ever since.

1. The Troll: Concordia-Moorhead vs. St. Olaf

PIC OF THE DAY! One of the best @Cobber_Football games of the year is the Lefse Bowl vs. St. Olaf. And of course - it wouldn't be a Lefse Bowl without the star of @CollegeGameDay - The Troll. Here is this year's post game celly with HC Terry Horan leading the way! pic.twitter.com/bQ0osC3Pgo

The most bizarre college football trophy is given to the winner of Concordia Moorhead and St. Olaf. The Troll, introduced by the NCAA Division III schools in 1974, is primarily made of moss and pinecones. For those wondering what Bigfoot would look like if he fused with an elephant, look no further than The Troll.