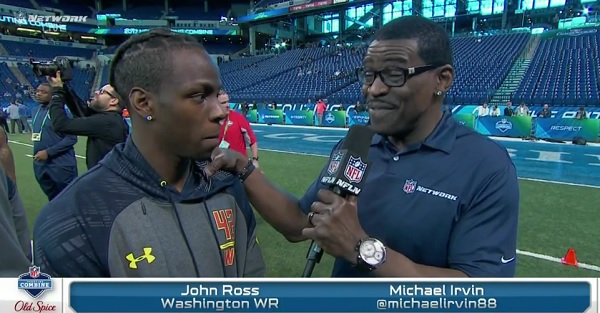 Chris Johnson had held the NFL Combine 40-yard dash record for almost 10 years, but that record fell on Saturday to Washington wide receiver John Ross. Johnson ran a 4.24 in his run, but Ross was unofficially clocked at 4.22 in this blazing run.

The NFL later confirmed that Ross officially ran a 4.22.

OFFICIAL: 4.22! There is a new 40-yard dash record holder! @WatchJRoss is the new KING of the 40! #NFLCombine pic.twitter.com/Antnt2sgzH

Ross appeared to be extremely humbled by setting the record.

Ross later cramped up after his run, and he is likely done for the entire Combine. However, he’s made a big statement with that 4.22, and he is likely to shoot up the NFL Draft mock boards after this impressive performance.

Ross had an impressive season in 2016 with Washington, racking up 1,150 receiving yards and 17 touchdowns.