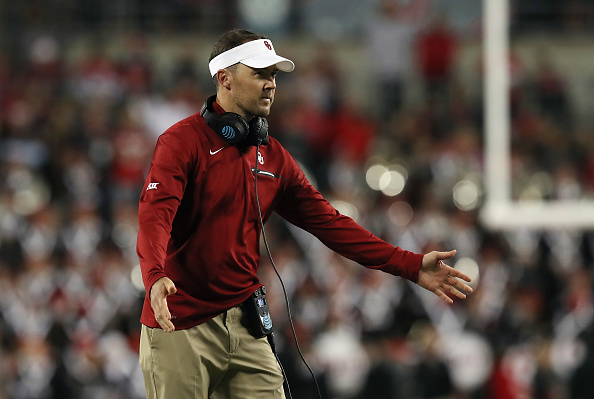 Bob Stoops was the head coach at Oklahoma for 18 years. Lincoln Riley, his former offensive coordinator, is two games into his tenure as the Sooners’ head coach, and so far so good.

Riley is 2-0 as head coach of the Sooners, and sure it’s early, but he just passed his first major test in a big way by beating No. 2 Ohio State this past weekend. His Oklahoma squad went into The Horseshoe, one of the toughest places to play in college football, and beat the second best team in college football, rather handily mind you.

Oklahoma won 31-16, outclassing the Buckeyes in just about every way. The Sooners notched 27 first downs to OSU’s 21. They were 4-of-11 on third down and 1-of-3 on fourth down. Oklahoma’s defense held an explosive Ohio State offense to just 7-of-15 on third downs and the Buckeyes were 0-for-1 on fourth. Oklahoma picked off J.T. Barrett in the fourth quarter, setting up a touchdown score that effectively iced the game, and the Sooners completely dominated time of possession.

In fact, the time of possession tells you just how good the Sooners were against their higher-ranked opponent. Oklahoma held the ball for 35:17, putting up nearly 500 yards of total offense. In comparison, the Buckeyes had it for only 24:43, totaling 350 yards of offense. That’s good against most opponents but not good enough against Oklahoma.

It was a statement win for the Sooners.

Not only did it come on the road, but it came against the team looking up to only Nick Saban’s Alabama Crimson Tide in the polls. Well, at least they were.

After the win, that’s now Oklahoma’s spot to occupy. In the most recent AP Poll, the Sooners checked in at No. 2. Alabama is still the top dog, for now, but Oklahoma is definitely the talk of the town as the weather starts to get colder.

It’s worth noting that there is still plenty of season left to play, and any good coach knows that he needs to make sure his team keeps moving forward. It would be easy to get complacent after perhaps the biggest win of the season, but Riley knows that it’s just the start for his Sooners. Here’s what he had to say after the OSU win, according to Heather Dinich of ESPN:

“I told them in there, we’ll be disappointed if this is the highlight of our season,” Riley said. “We’ve still got a long ways to go. We’ve only played two games.”

“Everyone is going to want to anoint us now,” he said.

In a way, Riley is right. His Sooners are clearly a College Football Playoff darling right now. He’s also right in assessing that his team has to make sure the OSU win wasn’t the high mark of their season.

Where he may be wrong is in his humility. It’s a great trait to have, but it doesn’t tell the whole story in this instance.

Everyone is going to be wanting to anoint Oklahoma, but that’s because Oklahoma is worth anointing.

The rest of Oklahoma’s schedule features games at No. 18 Kansas State, at No. 9 Oklahoma State, against No. 20 TCU at home and of course, the Red River Rivalry against Texas, but which one of those games is going to be bigger than the one the Sooners just played and won? Sure, they’re going to be tough contests and Oklahoma won’t be able to just show up and assume that a win is in the books, but if No. 2 Ohio State couldn’t topple the Sooners in front of their home crowd, which of the above teams is really a threat to Oklahoma for the rest of this season?

The Sooners have a tough defense, an explosive offense and a Heisman candidate at quarterback in Baker Mayfield, who completed 27-of-35 passes for 386 yards and three touchdowns against OSU. They also have one of the brightest young coaches in the game in Riley, who just outgunned Urban Meyer on his home turf.

The Sooners don’t need anyone to anoint them for anything. They’ve already done that for themselves by beating the Buckeyes. This is a team that has proved it has what it takes to win it all.