One weekend into his job, a coach added 10 commits with no assistants in place 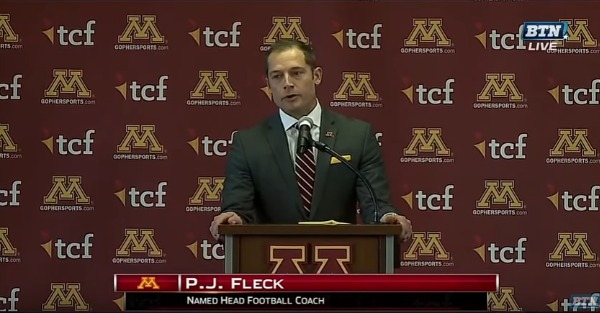 Some might say that P.J. Fleck is backing into his new job as Minnesota’s head coach, picking up recruits before even bothering to assemble a coaching staff.

But when you’ve got a host of commits willing to follow you to the ends of the earth — as these players did when Fleck was at Western Michigan — you naturally convince them to come with you.

Which is exactly what Fleck did. He was hired to lead the Golden Gophers Friday, and by Sunday he’d talked 10 players that had verbally committed to Western Michigan into joining him in Minnesota.

And out of those 10 new commits, not a single one had ever visited the university, something that just doesn’t happen on the college football recruiting trail.

“What made me what to commit to Minnesota without seeing it, is knowing coach Fleck,” said Tanner Morgan, a three-star quarterback out of Union, Ky. “I know great things will happen there because of coach Fleck.”

Three-star tight end/defensive end Nate Umlor, an Allendale, MI native, is another player that decided to follow Fleck. He says he’s believed since day one that Fleck could turn him into a next-level player, so after Fleck got the Minnesota job, he knew he had to stay committed to him.

“It was very hard for me to be far from home,” Umlor said, “but I committed to Coach Fleck and I always knew that he was going to be my head coach. I love Coach Fleck and we will do big things. We all know how he is at this point and he fits the type of person that I want to be. He can help me fulfill my dreams.”

RELATED: After being overlooked for coaching vacancies, Les Miles may have only one more option

The talent level of the Western Michigan commits will invariably come into question. After all, the Big Ten is big time football, the MAC is not. More than half of them, however, have also attracted some power five interest, including Umlor and Morgan who fielded offers from Illinois and Louisville, respectively.

All things considered, whether or not Fleck is already going about things in unconventional ways has to be a side issue here, especially when his recruiting ability is already showing itself in spades.