Our thoughts are with a USC defender, who won the Pac-12 title after suffering an awful loss 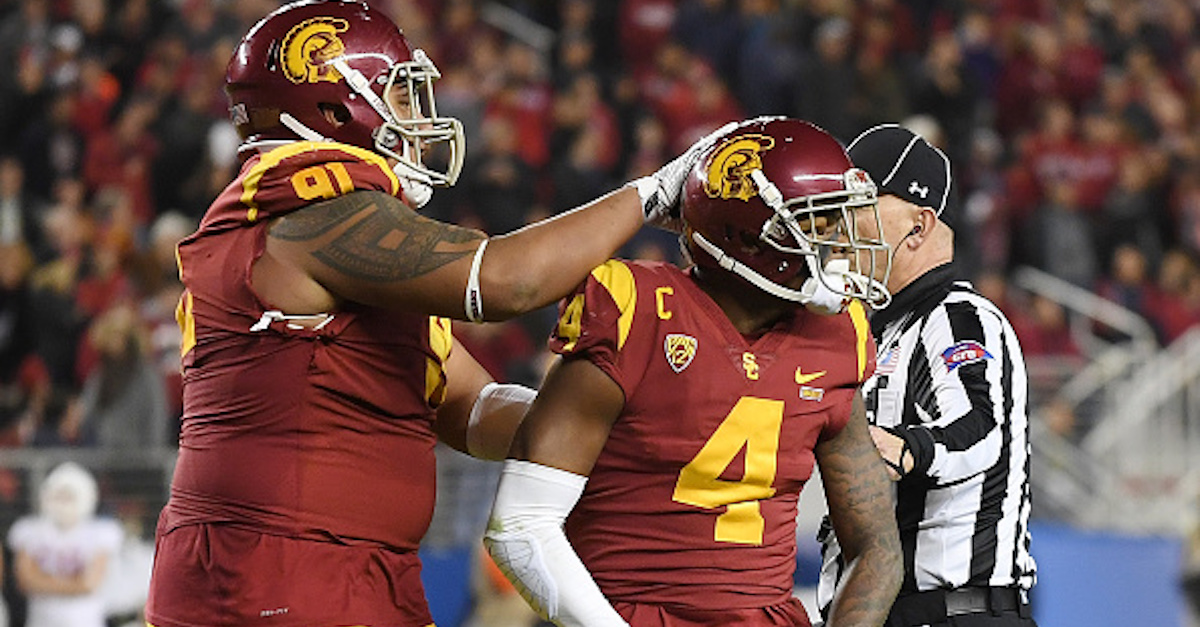 Thearon W. Henderson/Getty Images
SANTA CLARA, CA - DECEMBER 01: Brandon Pili #91 and Chris Hawkins #4 of the USC Trojans celebrate after Hawkins stop running back Bryce Love #20 of the Stanford Cardinal for a lost in the backfield during the Pac-12 Football Championship Game at Levi's Stadium on December 1, 2017 in Santa Clara, California. (Photo by Thearon W. Henderson/Getty Images)

USC is the Pac-12 football champion once again, but the win over Stanford had to have been a bittersweet moment for one USC player: safety Chris Hawkins.

Hawkins, a team captain, sadly lost his grandmother the night before USC’s 31-28 Pac-12 Championship win over the Cardinal. She died after a battle with breast cancer, and per reports, Hawkins barely slept the night before and was quite emotional after the game.

In fact, he spoke to Zach Helfand of the Los Angeles Times after the game about the moment before the game when he kneeled down in the end zone with his head down, and about his grandmother:

“I just wanted to talk to her for a little bit,” Hawkins said. “I was just thinking about her, thinking about all the past experiences I had with her. This was my first game where she wasn’t going to be watching, except from up above.”

The Trojans may not be going to the CFP and they won’t even go the Rose Bowl — it’s a semifinal bowl this season — but the win over Stanford was a huge one for that program. And for Hawkins’ part, he played a vital role in the conference title win for his team. He notched 13 tackles, two tackles for loss, and one forced fumble.

After the game, Hawkins was given the game ball by head coach Clay Helton, who applauded the senior for not only his play on the field but for the grit he displayed while playing with a heavy heart:

“The man lost his grandmother. Woke up this morning with tears in his eyes and battled for his brothers like I’ve never seen before. You’re the definition of a Trojan, son, and there’s a reason that you’re a team captain. I love you.”

For what it’s worth, Hawkins still has one college game left to keep making his grandmother proud.

Hours after the passing of his beloved grandma, USC senior captain @CHawk_4 put together a signature performance, making a career-high 13 tackles in the Pac-12 Championship Game. #FightOn pic.twitter.com/YUH5wQNxhn

The Trojans will likely find themselves in a New Year’s Six bowl game next and for Hawkins, there’s a chance he’ll be on to the NFL after a four-season college career that saw him notch 227 tackles, 13 tackles for loss, four sacks, four interceptions, three forced fumbles, three fumbles recovered and a defensive touchdown.