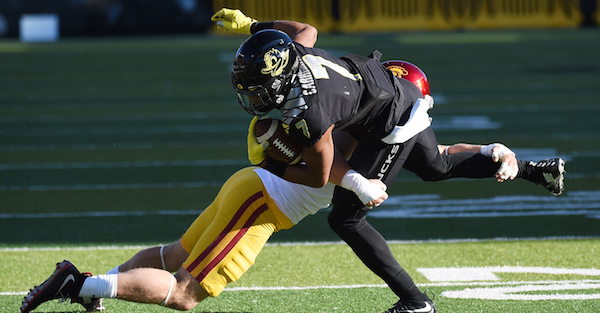 Former Oregon wide receiver Darren Carrington, who was dismissed from the program last week after being arrested for DUI at a local McDonald’s, may have found his next team.

The Oregonian‘s John Canzano reported that multiple Pac-12 programs have expressed interest in Carrington and the wide receiver was on a visit to Utah on Wednesday.

More than one Pac 12 coach told me today he was interested in Darren Carrington… the ex-Ducks receiver spent the day at Utah.

ESPN’s Tom Hackett later confirmed that he heard Carrington was “more than likely coming to Utah,” according to sources.

I have a reliable source that has told me Darren Carrington is "more than likely coming to Utah".

Carrington, who graduated from Oregon this spring and is eligible to play immediately, was a second-team All-Pac 12 receiver in 2015. He enters his final season of eligibility having caught 112 passes for 1,919 yards and 15 touchdowns.

Carrington has been involved in numerous off-field issues during his college career prior to his DUI. However, he would provide an immediate spark to any offense he chooses to join.