Four-star QB Tanner McKee officially signs, but here’s why he won’t be playing for at least two years 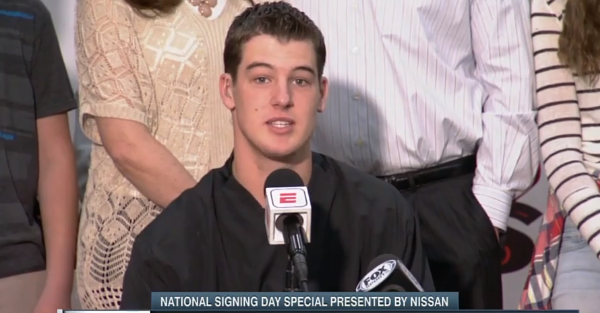 Four-star quarterback Tanner McKee officially signed with Stanford University on Wednesday during National Signing Day, but won’t be gearing up for the program for two years.

McKee addressed his leave of absence from football prior to making his announcement:

“As most of you know, I’ll be hanging up my cleats for two years to serve a two-year mission for my church,” McKee said. “I want to thank my school of choice for respecting that decision and I know I’ll be a better football player when I return. I’ve chosen to pursue my athletic and academic career at Stanford University.”

As McKee addressed during his announcement, it was pretty cool to see such an established program like Stanford honor McKee’s request to serve a two-year mission for his church. He is currently the No. 76 player overall in the ESPN 300 and has displayed the ability to make all of the throws college programs want to see. Scouts say the pro-style system at Stanford fits his game well and he should flourish once he begins playing in two years.

With McKee onboard now, the future looks to be bright for Stanford at quarterback.