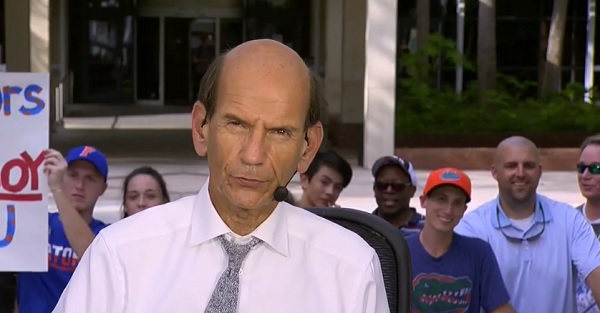 SEC Network’s Paul Finebaum has softened his stance on Notre Dame following the Fighting Irish’s dominant win over USC this past weekend.

During an appearance on ESPN’s Mike & Mike in the Morning on Tuesday, Finebaum wore a Notre Dame helmet and begged co-host and former Fighting Irish defensive lineman Mike Golic for forgiveness after scathing comments earlier in the season.

“When you’re wrong, you’re wrong, OK,” Finebaum said. “And it’s pretty obvious I could not have been more wrong about Brian Kelly and Notre Dame.

“I know the Notre Dame family doesn’t want any part of me, but I’m here to offer whatever condolences … and I’m asking for absolution.”

Finebaum has long been a critic of the Fighting Irish, particularly head coach Brian Kelly, who he referred to as “a miserable human being” during the team’s 2-4 start in 2016 and even called for the coach’s firing earlier this season.

Finebaum was also critical of Kelly after the coach snapped at a reporter for asking how his team was going to avoid another bad start after losing a close game to Georgia in Week 2.

“Brian Kelly, to me, is a jerk … a punk,” Finebaum told USA Today. He’s closer to the end than he’s ever been. That is going to help expedite it.”

But after Notre Dame’s recent string of big wins, the SEC pundit swallowed his pride and jokingly showed his support of the team during his recent Mike & Mike appearance.

“I have never been more proud to be a Notre Dame football supporter in my life,” Finebaum said, perhaps a bit tongue-in-cheek.