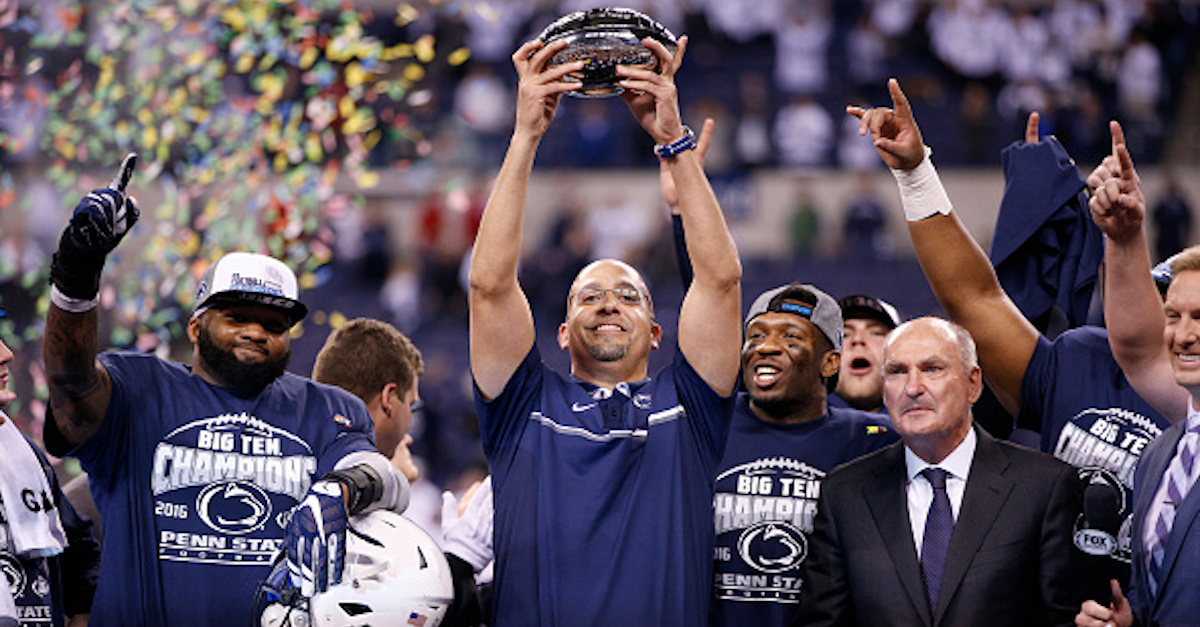 A once proud program, the Nittany Lions were torn apart by Jerry Sandusky’s heinous acts against children and the ensuing coverup. The end result of the scandal saw Sandusky in prison along with other members of the Penn State administration, including former Athletic Director Tim Curley and former University Vice President Gary Schultz. Then legendary head coach Joe Paterno was caught up in the scandal and ultimately fired after 46 years as head coach for the role he played in keeping Sandusky’s transgressions largely under wraps.

Paterno died shortly after leaving the program, a once proud head coach and one of the real legends of college football brought low by an unimaginable situation.

The NCAA hit Penn State with sanctions that fit the crime. The school was handed a five-year probation, a four-year postseason ban, the loss of all wins from 1998-2011, a $60 million fine, and a loss of 40 initial scholarships from 2013 through 2017.

It was worse than a death sentence for Penn State, or at the very least it appeared to be. The Nittany Lions were cut down at the knees and frankly, there were few who could convincingly argue that they didn’t deserve it. Sure, the current players on the team had nothing to do with Sandusky, his crimes, or even Paterno’s role in it all, but the lack of institutional control was just too much to ignore.

Penn State’s rise from the ashes has been something to see. Bill O’Brien took over in 2012 and lasted only two seasons before bolting for the Houston Texans of the NFL. He was a rising star in the coaching industry and helped take some of the sting away for PSU, but ultimately, he was just using Penn State as a stepping stone to get to the NFL.

James Franklin was hired away from Vanderbilt and immediately was hailed as the savior of Penn State football. Franklin was a terrific recruiter for the Commodores and managed to keep that program competitive in a very tough SEC — which was no easy task. It was obvious that Franklin needed time to get his system in place, but he came right out of the gate and proved his recruiting chops in the Big Ten.

That was the good news.

The bad? He went 7-6 in 2014 and followed that up with a 7-6 campaign in 2015. He was 1-1 in bowl games for Penn State, but ultimately, heading into year three it looked like PSU was doomed to mediocrity.

At least that was better than nothing, right?

Some would say otherwise.

But then things finally clicked for Franklin, and here the Nittany Lions are — standing on the doorstep of greatness and at the very least on the doorstep of a CFP run. Franklin finally broke through in 2016, riding an explosive offense and a tough defense all the way to the Big Ten Championship and ultimately, The Rose Bowl. Penn State went 11-3 and beat Wisconsin for the Big Ten Championship in Indianapolis, winning 38-31.

The Nittany Lions won nine games in a row before losing to USC in an instant classic in the Rose Bowl, and entering 2016 with potential Heisman candidates in quarterback Trace McSorley and running back Saquon Barkley, there’s a very good chance PSU wins the Big Ten again this year. Frankly, there’s just as good of a chance that Franklin and comany end up as one of the top four in the College Football Playoff.

It’s been a miraculous comeback for Penn State, so much so that Big Ten Commissioner Jim Delany recently stated that the Nittany Lions are back in business, according to Adam Rittenberg of ESPN.

“They’ve gotten to the other side,” Big Ten commissioner Jim Delany said Monday.

And while that can be argued, it’s becoming harder and harder to do so.

Franklin has gotten Penn State to this point by staying the course. He took over a tough situation and proceeded to change the culture (most importantly), but he also continued to believe in his program.

It would have been easy for him to get down after two mediocre seasons, but Franklin never lost his high energy and positive nature (at least in terms of what we’ve seen in the media) and he continues to be a coach players love playing for.

Need proof of that? Look no further than the recruiting rankings.

According to 247Sports, Penn State had the No. 24 ranked recruiting class nationally in 2014. In 2015, the Nittany Lions jumped up to No. 14 and in 2016 and 2017 they again finished in the top 20 classes nationally. This all happened while the stink of the Sandusky scandal still lingered. We may think of PSU as Big Ten champs today, but remember that while Franklin was putting together these classes, he had a lot going against him.

Franklin has gotten players to believe in Penn State again, both as a program and as an institution — and that’s been his key to success.

The Jerry Sandusky scandal will never leave Penn State, nor should it. It’s an ugly scar that should remind the University of the horrors that took place, and it should remind the community often enough so that it never happens again.

No, PSU will never fully heal, but in terms of moving on and being “back,” it certainly seems like the Nittany Lions have done it.

Of course, Franklin and his crew will have to prove 2016 wasn’t simply just a flash in the pan, but for all intents and purposes, Penn State football has been resurrected.