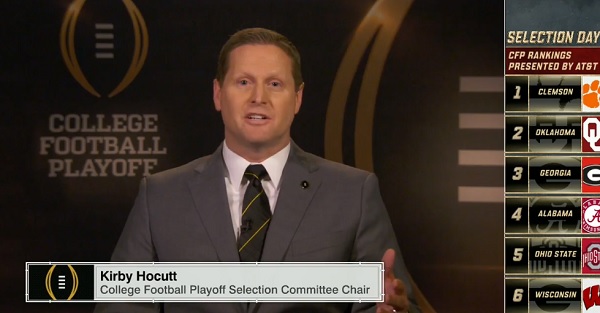 The 2017-18 College Football Playoff is official, and the committee announced via ESPN on Sunday that Alabama (11-1) was in and Ohio State (11-2) was out.

The build up to that choice had already generated a lot of debate, and the selection of Alabama — in addition to Georgia, putting two SEC teams in the Playoff — is sure to generate even more controversy as the college football season concludes.

After the announcement, Playoff committee chairman Kirby Hocutt explained why Alabama was selected over the Buckeyes, with Ohio State’s 55-24 defeat at Iowa being brought up as a major factor.

Hocutt went on to say later that Alabama was “unequivocally” the No. 4 team in the nation.

Alabama’s selection marks the first time in the College Football Playoff’s four-year history that two teams from the same conference have been selected. Alabama was selected despite not winning a conference championship, a category where Ohio State had a leg up thanks to their 27-21 win over Wisconsin on Saturday night. Apparently that win was not enough to sway the committe in favor of the Buckeyes.

The College Football Playoff will start on Jan. 1 with the Rose Bowl (No. 2 Oklahoma vs. No. 3 Georgia), followed by the Sugar Bowl (No. 1 Clemson vs. No. 4 Alabama) as the two semifinal games. The Championship Game will be played on Jan. 8 in the Mercedes-Benz Stadium in Atlanta.