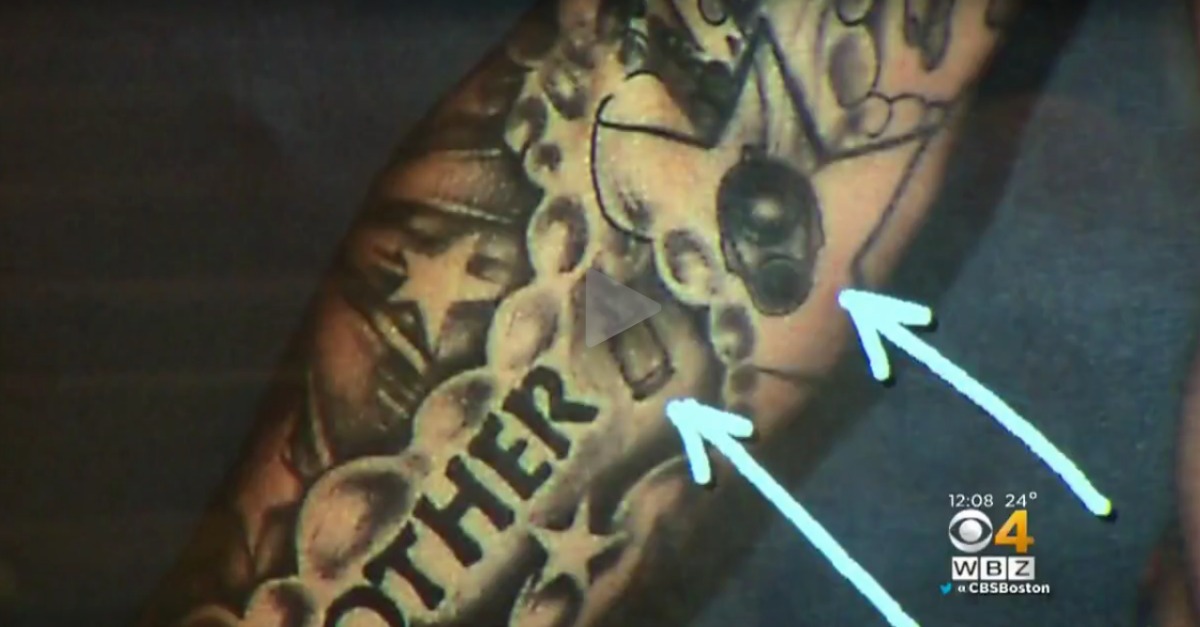 Aaron Hernandez had tattoos of a partially loaded revolver cylinder and the phrase “God Forgives,” among other things, inked on his arm about eight months after authorities say he killed two men in a drive-by shooting, according to testimony Wednesday.

The witness, California tattoo artist David Nelson, testified before Judge Jeffrey A. Locke, who will decide whether Nelson will testify in front of the jury, according to a report in WBZ-News, Boston.

Hernandez, a convicted murder who once played for the Florida Gators and New England Patriots, had been charged with killing two men — Daniel de Abreu and Safiro Furtado – in a drive-by following an incident at a Boston nightclub. Hernandez, now 27, has pleaded not guilty.

Nelson, in his testimony in Suffolk County Court as shown in a WBZ news clip, said, at Hernandez’s request, he tattooed a semi-automatic hand gun, one spent shell casing, a cylinder from a revolver with five out of the six bullets remaining; the newscast also said Nelson testified he tattooed a muzzle with smoke coming out and the words God Forgives tattooed backwards.

Prosecutors say the five bullets denote the number of shots fired at the BMW that de Abreu and Furtado rode in. But the defense challenged the testimony, and argued Hernandez never requested a depiction of a specific number of bullets, just that he wanted an empty chamber.

Additionally, the jury saw the blood-soaked clothing of the victims.

Reynolds describes the blood-soaked red and yellow plaid shirt with a bullet hole in the right shoulder worn by Furtado.#AaronHernandez

Before we see that horror, and so Furtado's mom can compose herself, Judge Locke calls a 5-minute recess. #AaronHernandez

A woman juror, after seeing the shirt, makes a point of looking at #AaronHernandez.

Hernandez’s defense team, led by Jose Baez – known for winning an acquittal for Casey Anthony, who was charged with killing her daughter – says his client is innocent.

Hernandez is already serving life in prison without parole for killing Odin Lloyd.