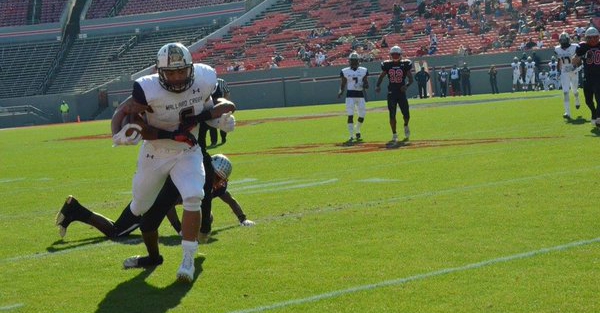 Three-star tight end Thaddeus Moss (6-foot-3, 240 pounds, Charlotte, NC) has drawn a lot of buzz as a recruit, stemming from the fact that his father is one of the greatest wide receivers of all time — Randy Moss.

On Saturday, the younger Moss announced his commitment after an official visit; he’s staying local and going to North Carolina State.

I'm beyond blessed to announce that I will be shutting down my recruitment and committing to Nc State❗️❗️❗️ #Pack16 pic.twitter.com/rKPgAd8z6o

This is a huge pickup for N.C. State, as Moss already has the size to play immediately. Though just three-stars at 247Sports, Moss still rates well at his position (No. 18) and in his state (No. 17) as a recruit.

So which teams are feeling the burn after this commitment? SEC schools like Texas A&M and Georgia are not thrilled, as those two schools were considered the favorites for Moss heading into Saturday. Instead, Moss will be taking his talents to the ACC.