Alabama DE suffers shooting injury, could be out for Peach Bowl 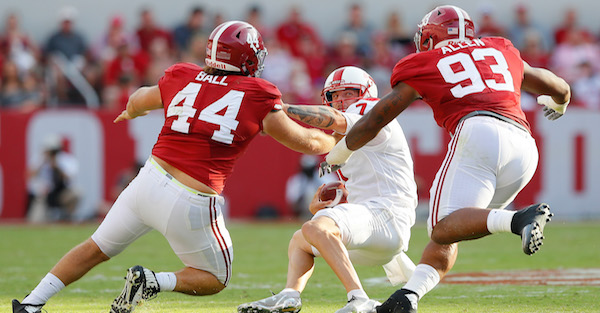 Alabama redshirt senior defensive end Dakota Ball reportedly accidentally shot himself in the finger while hunting, and head coach Nick Saban has no timeframe for his return to the field.

Saban says Dakota Ball didn't practice today after a hunting accident in which he shot his finger. #Alabama

Saban said backup DE Dakota Ball shot his finger in a hunting accident during the team's recent break, doesn't have a timeframe for return.

Ball has been a rotation player along the defensive line this season after spending last year as a tight end/h-back.

After playing one game as a redshirt freshman, Ball played in 12 games as a sophomore at tight end. He was mostly a reserve player/blocker during his junior year, but did register two starts at tight end.

He was recruited as a three-star player out of Lindale, Georgia.

Alabama plays No. 4 Washington in the semifinal of the College Football Playoffs Saturday, December 31, at 3 p.m. ET on ESPN.