Alabama fans have created a hilarious petition, and there’s no misunderstanding what their message is 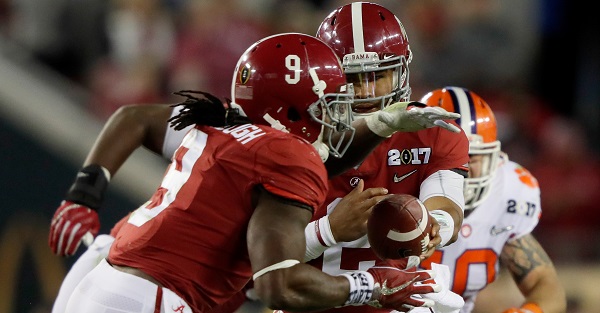 Jamie Squire/Getty Images
TAMPA, FL - JANUARY 09: Quarterback Jalen Hurts #2 of the Alabama Crimson Tide hands the ball off to running back Bo Scarbrough #9 during the first half against the Clemson Tigers in the 2017 College Football Playoff National Championship Game at Raymond James Stadium on January 9, 2017 in Tampa, Florida. (Photo by Jamie Squire/Getty Images)

Brian Daboll is the new offensive coordinator for the Alabama Crimson Tide and the hope for Nick Saban is almost certainly that he will stabilize the position after the strange tenures of both Lane Kiffin and Steve Sarkisian. To that end, most Alabama fans would like a run-based attack in the aftermath of what many perceive was a faulty strategy in the National Championship Game and that opened the door for a hilarious move from the fan base.

A petition was created on Change.org this week by Alabama fan Bobby Wesson and it reads as follows:

Imagine what the Alabama offense would look like on Saturdays if Brian Daboll heard “RUN DABOLL” 7 days a week. Imagine a world with Nick Saban yelling “RUN DABOLL” at Brian on the field instead of you yelling it at him through the television. Imagine 3rd and 3 and a stadium screaming as Bo breaks down the field for it all because “Run Daboll” called RUN DA BALL.

This is a pretty clear and amusing sign that Wesson would like the Tide to grind offensively in the running game and it is a brilliant way to exercise that notion. Whether Alabama will actually follow his crystal clear instructions remains to be seen, but the last name of the offensive coordinator will provide plenty of fodder before the 2017 campaign even begins.