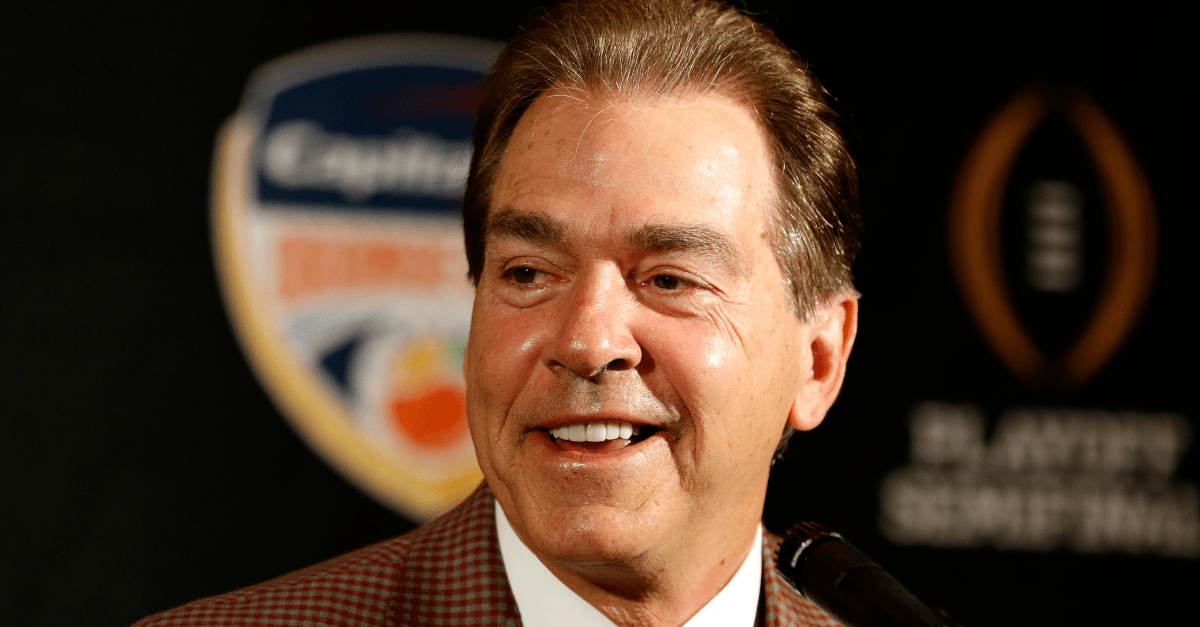 If there was any question about that, consider this scene from the Orange Bowl. Saban was absolutely livid on the Alabama sideline. He stomped, he yelled, he waved his arms, he grimaced and then capped his temper tantrum by ripping off his headset and slamming it onto the grass so hard that it broke.

It bears noting that Alabama was clinging to a mere 18-point lead at the time, and was seconds away from scoring again.

Nick Saban is little bit mad. And they are up 31-10 on Oklahoma. #RollTide pic.twitter.com/S4ftlx15bP

RELATED: The 5 Reasons Why Nick Saban Never Wins Coach of the Year Awards

This is Nicholas Lou Saban Jr., 67 years old, a man who makes more than $11 million per year, occasionally laments not spending enough time with his granddaughter and a big Michael Jackson fan. He’s a man who would need both hands if he was to simultaneously wear all of his national championship rings, arguably now the greatest coach ever in college football.

Next Monday night, he gets a chance at another ring when Alabama (14-0) takes on Clemson (14-0) in Santa Clara, California. If the Crimson Tide win, Saban would capture his sixth AP national championship and, when including the BCS crown he got at LSU in 2003, his seventh national title in all ? both of which would have him standing alone in college football history.

This is why he is showing no signs of slowing down. Dabo Swinney, Saban’s opposing coach in the title game, is 49. Oklahoma’s Lincoln Riley, who lost to Saban in the semifinals at the Orange Bowl, is 35. Kirby Smart, whose Georgia team nearly beat Alabama in last season’s title game and nearly got the Tide again this year in the Southeastern Conference championship game, is 43.

“One of the great coaches who has ever done it,” Riley said.

Saban is under contract through 2025, and has gotten an extension in each of the last three years. Alabama is 127-12 over the last 10 seasons, by far the best record in America over that span. He is beloved at Alabama, and it’s mutual, as evidenced by the fact that when it was time for Saban’s daughter to plan her wedding reception she chose Bryant-Denny Stadium ? Alabama’s home field.

And now, another ring is just one more win away.

“Having the opportunity to work for Coach Saban, you can’t help but get better,” said Alabama offensive coordinator Michael Locksley, who takes over full-time as coach at Maryland after the title game. “When you’re around this guy and you get to see the work ethic, you get to see the organization, you get to see the structure, the discipline, how he goes about doing things, it rubs off not just on players but coaches as well.”

Losing a coordinator would be a huge blow to some programs.

At Alabama, it’s an annual rite. And the Saban Train rolls along.

When the Tide open next season against Duke, Saban will be on his fifth offensive coordinator in a span of 32 games ? Lane Kiffin, Steve Sarkisian, Brian Daboll, Locksley and whoever replaces Locksley. The Tide are 28-2 so far during this revolving-door run of coordinators. The names on Saban’s staff may change, but his process does not.

“One of the things that I always say to our team is, ‘So what? What’s next?'” Saban said. “Maybe you accomplished something in the last game, but the next game is the most important game, and that’s what we need to prepare for, and that’s what’s going to help you create value, because you’re kind of only as good as your last play in this profession and in this business.”

This is how good Saban is: He hires guys, teaches them everything he knows, then inevitably faces some of them when they become head coaches. And he beats them. Every time. Saban is 16-0 against the eight former assistants who have eventually lined up on the opposite sideline against him.

He likes the analogy of how at the start of every season, there’s a boulder at the bottom of a hill.

By the end of the season, only one team gets the boulder all the way to the top. And he’s still ready for that grind.

“That’s not been something that’s been difficult for me to do,” Saban said. “I think when it gets that way, then maybe that’s the time you shouldn’t be in it because I never want to ever be in a situation where I feel like I’m letting our players down in terms of creating value for them and personal development, academic support, how they can develop careers on and off the field. And that’s what our program is all about.”