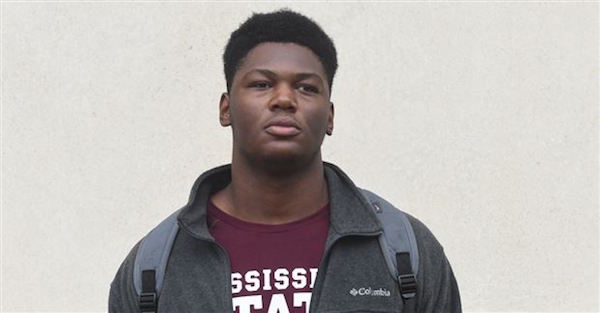 Four-star defensive lineman Byron Young has named Alabama as his “favorite” college choice following a visit to Tuscaloosa on Saturday.

“Since that visit, I would say Alabama would be probably be my favorite because they just wowed me with that visit,” Young told 247Sports.

Young, who has been recruited by linebackers coach Pete Golding, met head coach Nick Saban personally during his recent unofficial visit with the Tide.

“When we were talking he was telling me just about the success that they’ve had, how most of the players graduate — the ones that don’t graduate are usually going to the NFL Draft early,” Young said of his conversation with Saban. “He was talking a lot about that.”

Young ranks as the No. 14 strong-side defensive end, No. 10 player from the state of Mississippi and the No. 183 overall prospect for the 2019 national recruiting cycle, according to the 247Sports Composite.

The Tide are among the 11 teams who have offered a scholarship to the junior lineman, as well as Georgia, Florida, Mississippi State, Ole Miss and South Carolina.