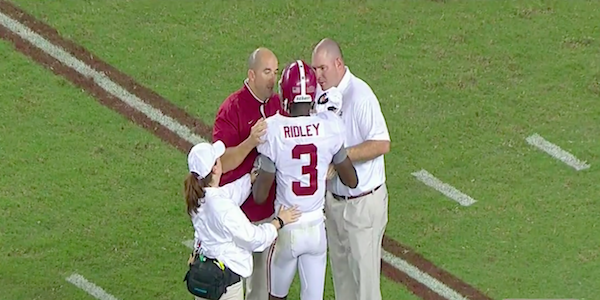 Alabama leading wide receiver Calvin Ridley suffered a knee injury during the third quarter of Saturday’s 27-19 win over Texas A&M and was forced to miss the remainder of the game.

However, head coach Nick Saban confirmed that the receiver only experienced a thigh bruise and should be “okay” moving forward.

Nick Saban says WR Calvin Ridley only has a thigh bruise and he’ll be OK.

Ridley fell awkwardly while blocking on a run play and attempted to ride a stationary bike before being taken to the team’s medical tent.

Ridley returned to the bike after examination and made several attempts to return to the game before ultimately being ruled out late in the fourth quarter, according to ESPN’s Holly Rowe.

Calvin Ridley is back on the bike.

Ridley finished Saturday’s game with five receptions for 68 yards. He currently leads the Tide with a team-best 29 receptions for 390 yards and two touchdowns during his first six games.