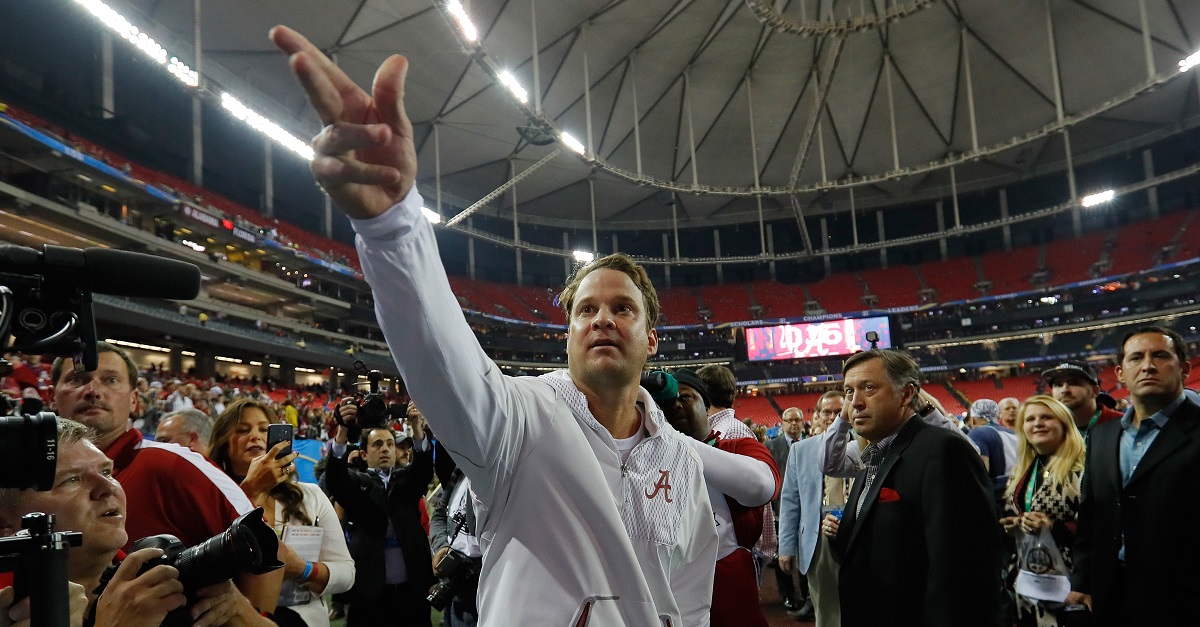 There was a pretty big uproar from Alabama fans when Lane Kiffin ended up not coaching in the National Championship Game. Was it because of Nick Saban being overbearing? Was it because he couldn’t handle two jobs — he had been hired by FAU by then — at the same time?

No one will really ever know, but it might have been that he was bribed too. Kiffin was speaking at a ceremony for the groundbreaking of FAU’s Schmidt Family Complex for Academic and Athletic Excellence when he told a story about a conversation with school president John Kelly. Keep in mind that Kelly is a Clemson alum, which will make this story way funnier. Here are Kiffin?s full remarks as transcribed in Matthew DeFranks? story from the Sun Sentintel:

?I remembered a story that I just told earlier to a couple of people. And please make sure you don?t tell this story anywhere or put this online anywhere, which you?re going to do, so thanks a lot. I was really excited about this job so I begged them to hire me because the area. I knew the great players around here. I knew that we could hire a great staff and win a lot of championships here. Nobody knows this story, including our athletic director, he doesn?t know it either.

?The president said, after the interview, ?We?re very impressed with you. We want to hire you. But I have to have a conversation with you and no one else can know this conversation. The conversation is this. I know Clemson?s really, really good, especially on offense, but here?s the problem. The playoffs are already set.? He said ?Alabama?s going to go beat Washington. I know we?re going to beat Ohio State because our athletic director is from there so we know they?re no good.? He said to me ?Here?s the deal. After you guys beat Washington and we crush Ohio State? ? Ohio State didn?t score that day, I don?t think. Did they? He said here?s the thing ?In order for me to give you this job, you cannot coach the national championship game. I have to make sure that Clemson wins the game.? That was very difficult. That shows you how much I believe in this place.

?My president is happy. Nick Saban is not.?

It eventually came out that offensive analyst Steve Sarkisian would be promoted to offensive coordinator for the game and scored 31 points against a stout Clemson defense despite basically a week’s notice. It’s been put on the record that the split between Kiffin and Alabama was a mutual one, but few people actually believe that.