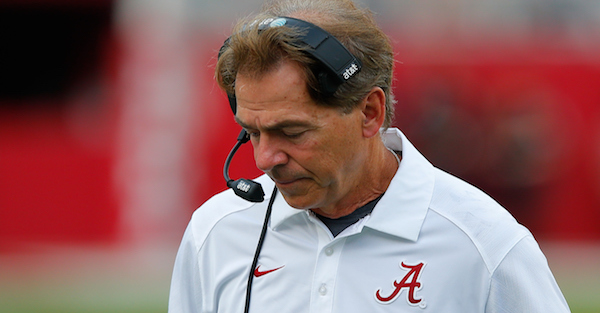 Jordan Edwards always wanted to play football for the Alabama Crimson Tide.  The 15-year-old, a freshman at Mesquite High School in a suburb of Dallas, TX., played quarterback and wide receiver on his football team. His football coach, in a Tweet, said Edwards had a “huge heart and a big smile.” The school district, in a statement, called Edwards “a good student who was very well liked by his teachers, coaches and his fellow students.”

No one will ever know whether Edwards will achieve his dream of playing for Alabama — let alone college football — because he was shot and killed by a police officer on May 7 .  The officer has now been fired, arrested and booked on a murder charge, per Dallas News.

In the midst of incredible grief and anger, Nick Saban and the University of Alabama has stepped forward with a heartfelt gesture. The university sent, to Edwards family, a jersey signed by Saban with “J. Edwards” on the back, as well as some other memorabilia.

Very cool of Nick Saban & Alabama to send this to the family of Jordan Edwards. His dream was to play for the Tide. pic.twitter.com/ne3kEz4yBe

Saturday April 29 should have a typical day of typical fun for a 15-year-old. Edwards, according to various reports that are not in dispute, was at a party with other teenagers in Dallas suburbs called Balch Springs. A neighbor, apparently worried about underage drinking, called police. There were also reports, as per the Dallas Morning News, that there were gunshots in the area. When police arrived, the teens scattered, and Edwards and a group of his friends got into a car.

Roy Oliver was the second of two officers to arrive at the scene, and he fired a shot from a rifle into the car. A bullet smashed into Edwards head and killed him.

Police initially said that Oliver fired because the car was aggressively coming at him in reverse. But body cam footage showed a different story — the car did back up, but was moving away when Edwards was shot. Oliver, a six-year veteran of the force, was subsequently fired and has since been arrested on suspicion of murder, an offense that, if convicted, carries life in prison. He’s currently free on a $300,000 bond,

The signs of support for Edwards and his family are everywhere, and unlike that team signs that fill the stands on Friday nights, these are constant reminder of pain. They started with his football coach’s statement on Twitter:

“Nothing can prepare you for a day like today. As a coach, there is no manual that tells you what to day or what to do when you lose a player. Jordan’s death is tragic and has hit our team and school hard. I have felt a range of emotions from extreme sadness, sick to my stomach, anger, questioning, and simply asking, “Why?” My faith tells me that only God can tell me why, but the answer will come in His time. But knowing Jordan, his huge heart, his big smile, and his constant positivity, God is using Jordan to affect all of our young men and help them to understand how precious life is, how it’s too short not to  live it with a giant smile on your face, and to not take one single day for granted. Or message to our team is to make today about Jordan. We have encouraged them not to engage some of the insensitive comments that have been made on social media because that is what those people want us to do. Today we want to focus on out brother, our teammate, and our friend, Jordan. He was an amazing young man that has a way to make everyone around him feel better. He had such an impact on all of us and we refuse to let anyone tarnish that. We will find out own way as a team to honor Jordan every day we have the opportunity to put on pads and play the game he loved. We will grind for him, we will work for him, we will play for him because we know he would have done the same for us. When we hit the field tomorrow we will do so with heavy hearts as we search to learn our “new normal” without Jordan, but we know he will be watching over us. I am so thankful for sports in a time like this so that our tram has an opportunity to lose themselves in the game they love for a few hours. We are praying for Jordan’s family, for this team, and all of Skeeter Nation and we ask that you do the same. This team will only become stronger as we are fueled to play in a way that Jordan is honored and that he would be proud of.”

.., and continued with a Dallas Morning News story:

His parents have not spoken publicly since their son’s death, but through their attorney, released a statement that was reported by CNN:

“Jordan was a loving child, with a humble and sharing spirit,” his father, Odell Edwards, and his step-mother, Charmaine, said in the statement. The bond that he shared with his family, particularly his siblings, was indescribable. While our family attempts to cope with our loss, we ask at this time the community please refrain from protests and marches in Jordan’s and our family’s name as we prepare for his funeral.”

Jordan Edwards was laid to rest on May 6, and his family issued a second statement afterwards:

“While we appreciate the passion and energy of individuals who just want to go out and do something in protest of the failures that culminated in Jordan’s murder, and so many other unnecessary deaths, our family is not interested in just doing “something.” We want to do the right thing. We are choosing to be patient and strategic and only engage in and support activities we believe will result in a specific outcome.  The cycle on injustice followed by protest and public outcry, with no measurable outcome, must be broken, We need to the systems that stole our son. We look forward to working with anyone who shares these goals.”

His father attended a protest on May 9.

“Every time I look at my kids, my family, I see the hurt in their eyes, and I try to be strong for them,” Odell Edwards said as he brushed away tears.