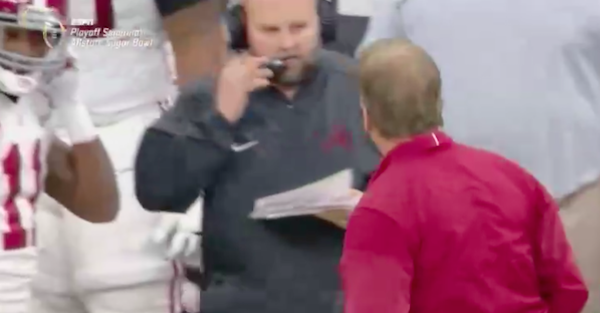 Ahead by 18 points in the fourth quarter, head coach Nick Saban laid into Daboll after the Tigers forced a fourth down with 7:15 remaining in the game in similar fashion to the “ass-chewings” he used to give Kiffin during his tenure at Alabama.

So u wanted to be the OC for coach Saban. "Those are called ass chewings son! U are to sit there and say yes sir u are right. 😂 @finebaum @espn @SECcountry Don't come to #thefaU 🤦‍♂️ https://t.co/bJO38OelCv

Though it’s not 100-percent clear, it seems that the coach may have yelled, “run the damn ball” among the tirade, which Daboll seemed to take in stride.

As color commentator Todd Blackledge pointed out, it’s likely that the coach wanted to score another touchdown in order to give his starters some rest during the final minutes of the game.

For what it’s worth, Daboll’s offense out-gained Clemson, 261-to-188, in total yards and accounted for two of Alabama’s three touchdowns during the victory.

Still, that wasn’t enough for Saban, who has earned a reputation for being one of college football’s biggest perfectionists.