Alabama QB commit opening his recruitment, may not enroll early 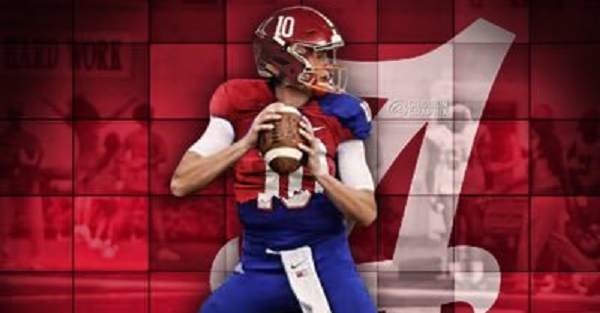 Alabama has had a big commitment from four-star quarterback Mac Jones since June of this year, but it looks like he may be backing off that commitment. He was set to enroll early, but the quarterback is now rethinking his commitment and enrolling early so that he can go on some visits and find another school.

The 6’2″, 180-pound pro-style quarterback out of Jacksonville talked about why he is reconsidering his choice and it has everything to do with the current quarterback situation in Tuscaloosa both with QBs on campus and incoming.

?It?s a tough situation. You have a freshman who played really well his first year and you have an incoming player in Tua who has the potential to be a very good quarterback at Alabama. I?m not scared of competition. It?s a big task ahead of me to think I can go in and play. I know I will have to work and fight my way into the battle.?

Still, Jones is keeping his options open for the time being:

?I don?t think I am graduating early anymore. Missouri wants me to come up for an official visit. That?s really the only other school coming after me right now. It?s a possibility I could visit other schools. I have a lot of time, but I know my Alabama official visit will be in January.

Jones has offers from Oklahoma State, Ole Miss, Louisville and Missouri among others.