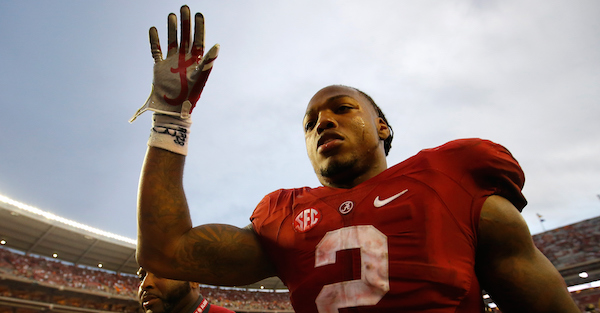 Alabama running back Derrick Henry is the latest Crimson Tide to carry the load, rushing for nearly 1,800 yards and 22 touchdowns, good for 6.1 yards per carry.

As Henry awaits another SEC Championship game — and the announcement of whether he’ll take home this year’s Heisman Trophy award — the Tide running back’s stock continues to rise, causing NFL executives to draw an NFL comparison, via NFL.com.

Three execs compare Henry to former New York Giants running back Brandon Jacobs in his prime. Jacobs rushed for 1,000 yards just twice over his nine-year career and had double-digit touchdowns just once.

Another exec compared Henry to current Green Bay Packers running back Eddie Lacy, while the final one compared him to LeGarrette Blount.

Henry is a quicker back than Blount, and runs with the style and ferociousness of Lacy. Don’t love the Jacobs comparison, but can see it simply in size and running style.